Anime. A sign the franchise is getting the attention it all wanted. With an anime adaption, the franchise will be exposed to even more general fans since anime is the most mainstream choice. But what makes an anime? What is the base, the “source” of these media known as anime?

Here is what it all comes down to, “source materials.” Originals are always better. This is what the general audience think but is this really so? Today, we’ll have a look at my own viewpoint, entailing my opinions for each source materials I had experienced, and whether or not it surpassed their anime counterparts.

The Spiderman comic books had their cartoons, likewise with Batman and even Superman. Anime, also has their own versions of comics called “manga.” Unlike American comics which is read from left to right, Japanese manga are read from right to left. This is probably because of the difference in structure with English and Japanese language.

Manga’s story is always told in pictures and panels, and sometimes, the quality of the manga depends on how the panels are divided. Of cause, the main focus visually is still on the artworks and drawings, since manga is technically a comic, and a comic is called “comic” for a reason. There is also the infamous 4-koma, which is generally a 4 panel strip manga with panels from the top to bottom, most anime like K-ON and Lucky Star are adapted from 4-koma. I recommend to check out an anime titled Bakuman, which, asides from stressing the point just the tough life of a mangaka, it also gives valuable information on how manga is drawn “behind the scenes”.

Comparing manga to anime, it’s a weird choice but I say I prefer anime actually. I don’t show it but I actually prefer colors and motion, and I value animations and sounds just as much I value the plots. I do like to read manga but I guess manga reading is more of a secondary priority to me. If the anime started airing fillers, like a wholesome of it, I could just watch other anime while waiting for the fillers to finish. If the fillers are always in just one or two episode, I can withstand that. Though currently, I mostly read more original manga where there isn’t even an anime announced for release yet.

Japanese games are just as popular as Japanese anime. The video gaming industry in Japan had sold numerous critically acclaimed games ranging from Final Fantasy to Persona, from Persona to the Tales series and the list goes on and on. It is not surprising that some of these games are being made into anime as well. Some is just a standard adaption, retelling the original plot from the game while some adaption is a sequel/prequel, increasing more depth to the general franchise as a whole. Best example for the latter would be Final Fantasy VII, the game had so many sequels and prequels to the point that they didn’t even overlooked the possibility of anime adaptions.

Most of the games adapted anime I watched had been not good sadly. The Final Fantasy anime are just downright bad, even the FF VII sequels. I would have known that Last Order and On the Way to a Smile would be disappointing but they went way beyond even lower then my expectations. The Devil May Cry anime is downright bad as well. Rough animations and artwork and the fights don’t have the same impact from the game. Sort of look like a certain Ironman anime, without the 3D. Hack anime bores the hell out of me and the Tales series are only around average in terms of quality and enjoyment. The latest game-based anime I’m watching, Persona 4, is currently the best one so far though I shouldn’t make judgement so quick yet without even catching up on the latest episode.

To me, game-based anime serves nothing more then to milk their original game’s popularity even further. I’ll have to think and reconsider very carefully whenever watching an anime adapted from games.

Light novels are a more rarer choice, especially when compared to the likes of manga. Though in around 2006, they started gaining widespread attention, more and more anime are originally adapted from light novels, with some examples including MM!, Shakugan no Shana, To Aru Majutsu no Index, Hidan no Aria, Gosick, Suzumiya Haruhi no Yuuutsu, Kara no Kyoukai, Fate/Zero and so on. A tidbit, when there’s J.C Staff is the production company and Rie Kugimiya is involved as the main heroine, there’s a good chance the anime is originated from a light novel :D

Light novels are.. well novels. Full of text like a story book, with very very few pictures. The said illustrations are beautiful though, since compared to the manga or anime, light novels illustrations look more soft and mellow. If there’s one thing light novels can accomplish, it’s giving more details to a particular surrounding and scene since it is quite text-heavy. This makes it easier to understand complicated plots. However, the wall of text sometimes make me dozed off more faster then usual so I can’t say I preferred reading light novels that much.

Visual novels are the ultimate fusion of anime, manga and novels all in one. It’s anime elements are pretty obvious, with the anime-style art and all and the voice acting. It also looks like a manga in a way that it tells a story through pictures, the only difference is that manga divided their pictures using panels, while visual novels “shift” through multiple pictures and sprites. Of cause, how similar it is to a novel is pretty self-explanatory. Over the years, there are countless designs for visual novels but this is a basic layout of how a simple visual novel would look like.

Visual novel is a supreme story teller, especially when a good production company is involved. Using creative words, beautiful music, and intriguing plotlines, they are able to capture scenes, emotions and surroundings with great emotional impact. Like manga, there are quite a lot of similar complaints saying that the anime branches off into a completely different plot then in the visual novel. Another type of similar rant would be that the anime lacks focus and details. The rants go on and on. This, I actually agree, and between anime and visual novels, I would say visual novels take the win. Another main difference that makes visual novels superior is the branching of routes. Visual novels are able to focus on different heroines while anime is always stuck with one. There are anime nowadays which tries to mimic a visual novel by airing a few episodes focusing on a heroine, then reset it back to day one, focusing on another heroine after that. This, however, doesn’t help the fact that visual novel is STILL superior, since visual novels have all the time to develop their individual routes while anime don’t, and in fact, their development for each route are cut even shorter due to the fact that they had to share screentime for other heroines as well.

As I had said, visual novels are great, and represents the ultimate form of otaku entertainment (Maybe I’m being a bit exaggerating). Had I understand the Japanese language more proficiently, I would probably even ditched my anime watching hobbies just to play them. Thing is I don’t, my grasp of the Japanese knowledge is at best to the level of ABCs, lol (This is one reason why my preference level for visual novels aren’t maxed). Anyway, my good friend in Sakurahana blog made a good post about why visual novels are better then anime. Have a look! 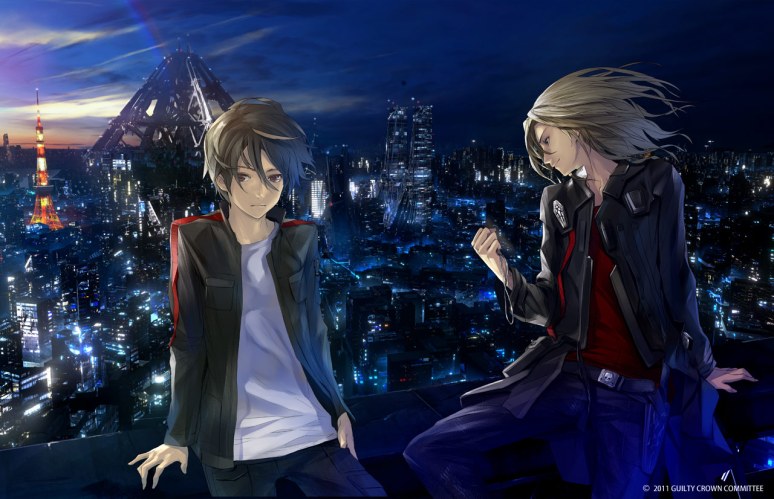 Original produced anime. Basically, this means that the anime did NOT adapt itself from anywhere. Everything here aren’t adapted from a manga, game or visual novel or anywhere else. Every characters and plots are completely original.

Original productions are mostly the result when a collaboration took place. One notable example would be Mahou Shoujo Madoka Magica, with it’s contradicting line-up of staffs. Angel Beats is also another great original anime produced by a collaboration of P.A Works and Key. Originals are awesome, though it is easy to feel disappointed in them since sometimes, expectations for them are really high. I like original runs myself. These kinds of works always showcased more creative sides in the making of anime. Production values are always unusually high with original runs, so be sure to expect some bad ass animations and sounds as well.

Final Thoughts
As you can see, my favorite is visual novels. It’s too bad playing them takes time and my pending list of visual novels to play keeps getting larger and larger. Even keeping up with my pending anime list is much more easier. Visual novels are fun though and I think anime fans who haven’t try it out should at least try it once. You will be surprised just how “different” a visual novel and anime could be, despite sharing the same title.

In case you haven’t notice, this is obviously for nopy’s project “Guide to Anime”, mixed in with a lot of my own personal views. Hope you all had a good read!