A Look At My Rigs – My Anime Space 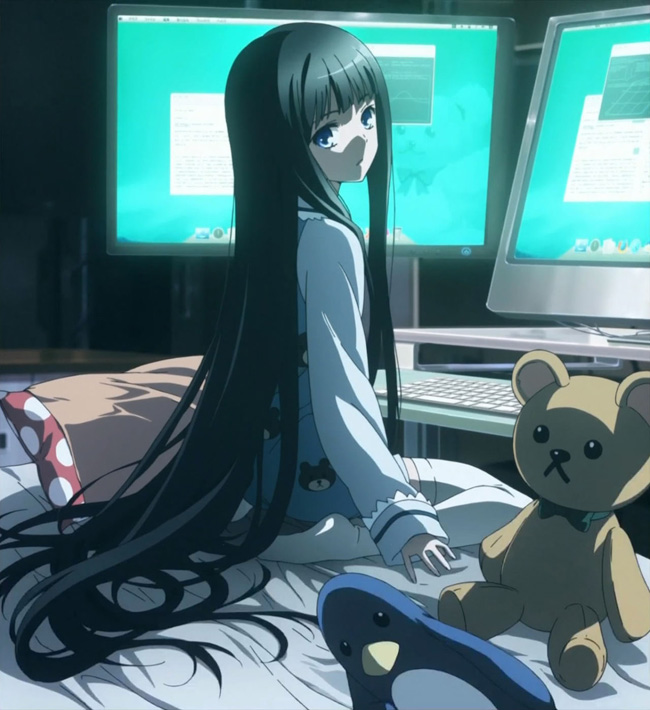 Ever since the emergence of internet and computer, we all had been relying on computer to watch our anime even more so then TV, so in that sense, a good PC would equal to a good anime watching experience.

Back then, I was using a very lousy desktop with a 1024 x 768 resolution, dat “square” monitor so to speak, and I was still using them even after the boom of widescreens. Since more and more forums had been using skins specialized for widescreens, browsing on them on my 1024 x 768 desktop is just plain weird, with some links skipped to the second line, getting “out of boundary” since my small monitor isn’t able to squish them all in.

But just last year, I decided to stop embarrassing myself using such desktop and went all out, purchasing the Dell XPS 8300 at an almost shocking $2000 (technology is expensive here). It’s one of the most, if not, the most expensive purchase I had ever made in my life, I remembered I bought my PS2 three times cheaper then this and even my sister’s LED TV is cheaper then my current desktop. 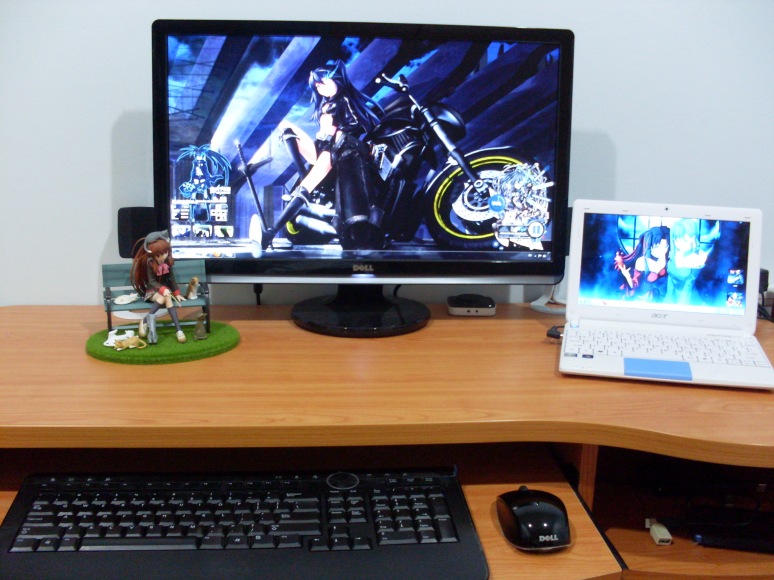 This is my current rigs

This is how my Dell desktop looks like. It had a whopping 8GB ram, 1TB internal hard disk drive, Intel i7 dual core processor (3.40GHz), an ATI Radeon HD 5670 graphic card and a 1920 x 1080 monitor, measured at 24 inches, which is just almost the same size as a small LED TV. The latest two is what makes my current desktop so enjoyable. With such high-end graphics and big sized monitors, playing games like Devil May Cry 4 and Assassin Creed no longer seems like a dream (I finished them almost straightaway) and of cause, watching anime is even more enjoyable. I could finally enjoy watching anime in genuine HD format. This leave me with another problem though, storage. Since I need to download high-quality episodes in order to enjoy watching anime via my monitor to the fullest, my HDD free spaces get used up twice as fast. However, it’s just a small problem though since the increased enjoyment of watching my anime completely outweighs the lack of space issue.

As you can see from the above pic, there is a small netbook as well and I usually use it to do some quick multitasking. Here are some more pics for the netbook: 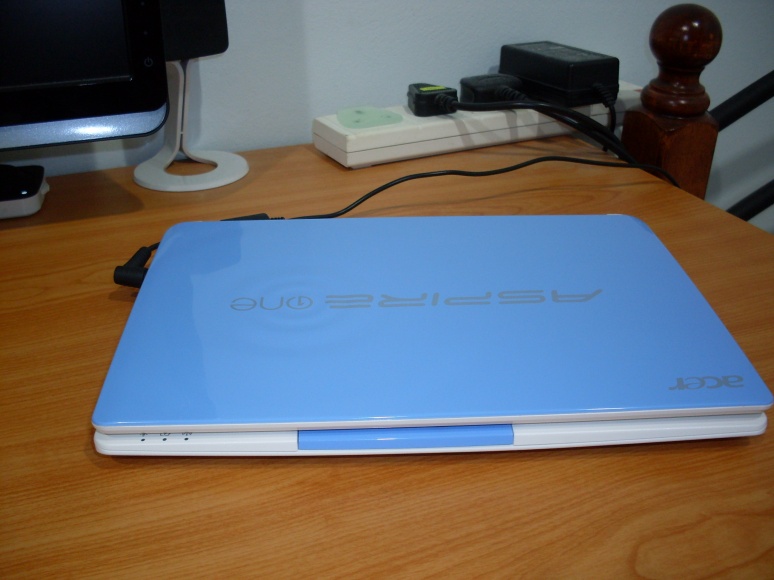 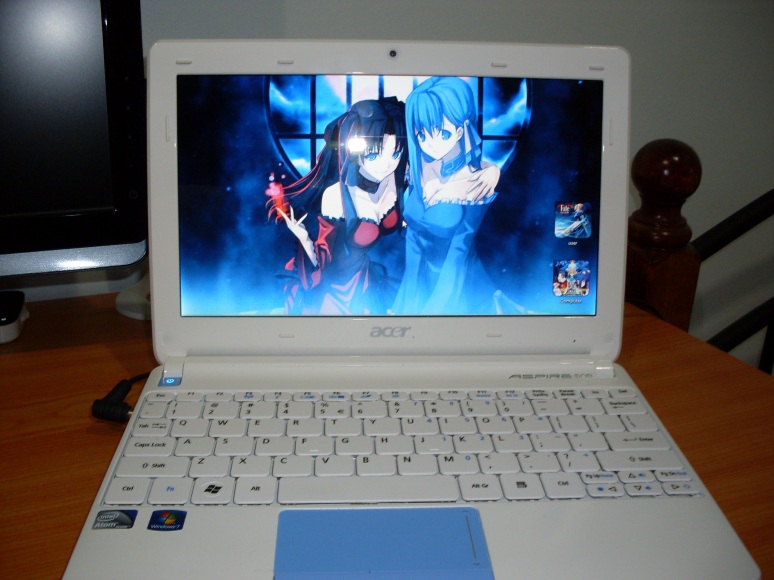 This is my Acer Happy 2 netbook, which again, is bought last year (it’s a year full of purchases, and I’m actually not quite happy with it) I bought this around December if I’m not mistaken. I originally wanted the Dell Inspiron netbook but seeing that the Acer one is cheaper, I chose it, in which I bought it at around $450, not sure how much others can buy this at but I’m sure most can get it cheaper then me. The specs are fine, I don’t particularly need it to be powerful since I just need it for multi-tasking, I would say at $450, it already runs well. The battery especially, when fully charged, can last for 8 hours straight.

The only thing that made me regret buying this is the ironically “happy” colors. Obviously, only the bright colors are available, light blue, pink, orange and yellow. Inside, it’s a full sheet of white. Most of the colors are gay way beyond words and one way or the other, I managed to find a blue one, which is better then the rest a bit. At some point, I always recall myself making the big decision and always thought that I should have bought the Dell one instead, oh well, no use crying over spilled milk.

Those two are the computers I mostly use but I actually have one more. Check it out: 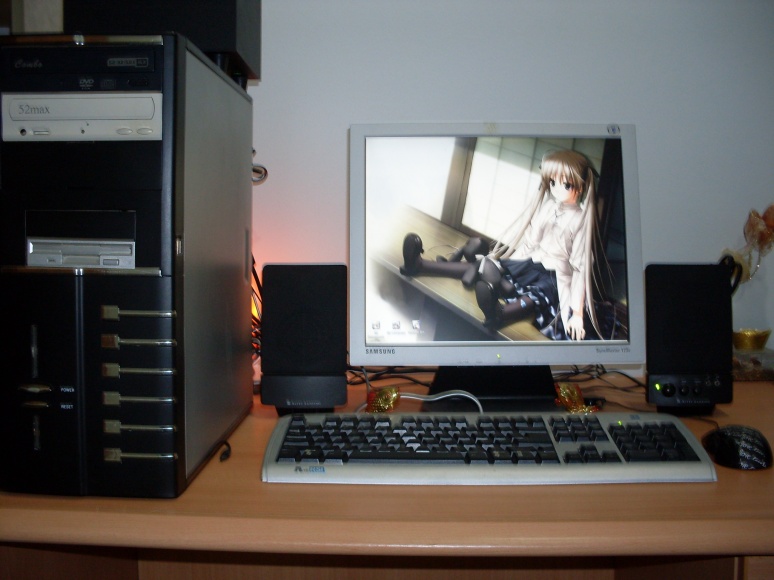 Before you say anything, no, this is not the 1024 x 768 desktop I was talking about. The one I talked about had been given to someone else and the one shown here is my second 1024 x 768 desktop. Actually, I got this completely free, before I bought my new Dell desktop that is. My uncle gave me his CPU of his since he was going to change into a new system. So I got the CPU, stick in some old monitor and keyboard, reused the old speakers I used in my previous “square” desktop, bought a new mouse, and wa-la. I almost never use this at all though, just at times, my mom would come and mess around with it. I’m considering scrapping it and throwing into the junkyard since it’s just a waste of space and I got a better PC to use. But for one reason or another, it had been sitting there on the desk for almost 2 years already. Oh well, at least I don’t have a CRT monitor at my home no more..

So yep, these are all the computers I use. While they are not the strongest, I’m quite satisfied with them, especially my main PC for enjoying my anime and games.