Kara no Shoujo, is a visual novel by studio Innocent Grey, The game is an investigative interactive visual novel, and implemented gameplay with traditional visual novel elements.

Set just right after World War II in Japan, it follows Tokisaka Reiji, a former cop, now a private detective. An old friend in the Tokyo metropolitan police force requested his help in investigating a case of brutal serial murders. He was also requested by an all-girl school to investigate a missing person case and was also requested by a mysterious girl from said school, Touko, to find her true self. Bizarre chain of events, but little did he know that all of them are connected much more then he thought – they are even related to one of the case six years ago where it caused the death of Reiji’s fiance.

Extremely mysterious, alluring yet grotesque at the same time, the story tells the tales of adults, unlike the usual high school settings. The slow foreshadowing script reinforced the mystery of the visual novel – The vague introduction to the series for example: giving us a quote out of an in-game fictional book is quite an interesting way to begin the series. Through playing the game, the way how each revelation manifested another mystery, and how each body counts keep increasing no matter how much you investigate, while brutal, is a chaotic beauty. The way how more questions arise no matter how much you investigate keep your eyes peeled as you attempt to figure out who is the mastermind behind the mass serial murders.

I also find it interesting how the story and some of the murders are based on several motifs; Dante’s Divine Comedy for one, and also some fictional in-game ones like the in-game book, The Egg of Neanis, and the painting, Kara no Shoujo itself. Kara no Shoujo tells a story of obsession; it becomes an omnipotent mindset for some of the characters, especially the antagonists. 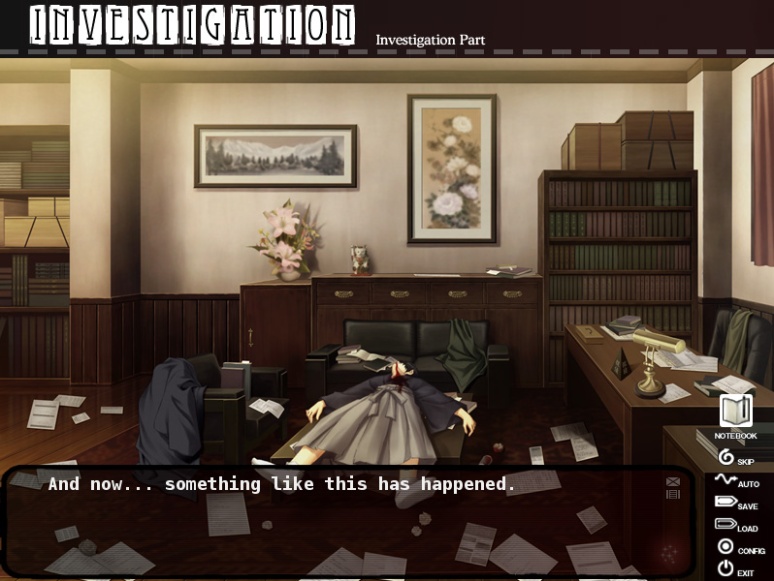 And in order to let players immerse into the investigations of these chain of murders, it also has a fun interactive gameplay to boot, and it’s investigative mechanics remind one of the Ace Attorney series, as the gameplays are immensely similar.

During investigation moments, you will be prompted to move around the mouse and try to find evidences that will help you get closer to the truth. At times, you will be examining a room, and at times, you will be examining corpses. Reiji also has a notebook, where he will update any new information he finds, including any new incidents happened around the characters he interacted, list of evidences and testimonies and so on. There’s even a map; during certain point of the game, it will give you “free investigation periods”, so you’re free to choose a place of your liking to check out, triggering some side stories or to find out more clues for your cases. Needless to say, will also effect the story and ending to come, depending on the encounters you made during these periods.

One slight difference, is that Ace Attorney will not go along with the story unless you obtained all the needed evidences, for Kara no Shoujo, it’s possible to miss some significant clues and the story will go on regardless. The difference in clues possession will also lead to a different story or ending, or perhaps even a bad ending. In that sense, when playing Kara no Shoujo, a lot of factors can influence the ending, from something traditional as dialogue choices, to the encounters during the free investigation periods and also the evidences obtained. At that end, it’s extremely complex, and without checking the walkthrough, it’s very easy to lead to a bad end unnoticed.

Not accounting for the earlier endings and bad endings, the main ending and the true ending (which is basically an extension of the main ending with better closures) possess quite the shocking plot twist, where the main character decided to seek more of the truth caused an explosive amount of revelations. With a chaotic plot like the one Kara no Shoujo had, it’s surprisingly how well the unending questions and mystery are all tied up conclusively in the ending. 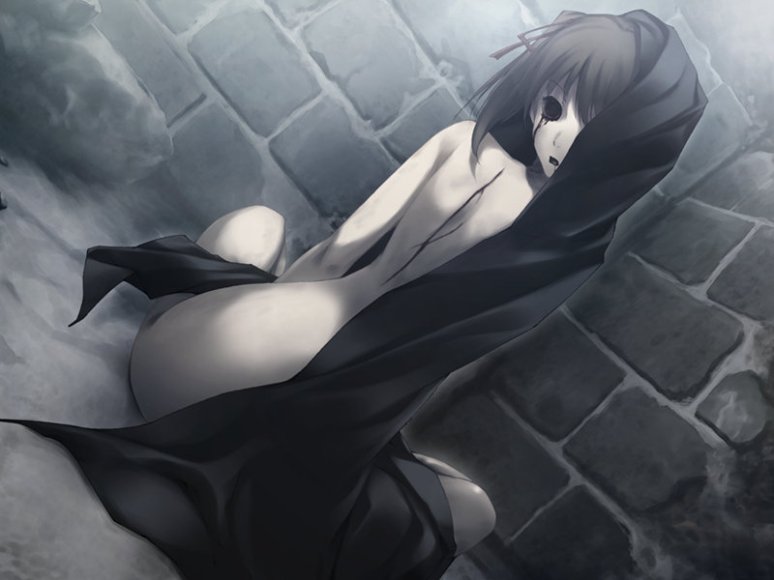 I said earlier that Kara no Shoujo is grotesque, and I meant that quite literally visual-wise. The corpses all die in gloriously brutal and bizarre ways – limbs dismembered, head twisted, eyes plucked and so on and so forth. The bizarre condition of the victims when they died, are there any special meaning in that? It’s of cause, for our detective to find out. And of cause, as a detective, you are forced to look at these nasty corpses straight in the eye, examining the piles of blood, flesh and even interior parts for any clues possible. In a way, the nature of the corpses are “visually stunning”, and at the same time, true to its R-18 rating, this is one of the games where it’s best to leave minors out of it.

The other graphical aspects of Kara no Shoujo is satisfactory. Being a visual novel with adult characters, it has graphical designs with dark and realistic outlooks akin to the atmosphere of the visual novel. Character designs are good enough, although the amount of sprites for each of them is lacking. The backdrops are detailed and beautiful, a majority of them are CGs of nostalgic traditional-styled Japanese houses and is a great reflection to the setting, since during 1950s, I would assume a lot of Japanese are still clinging on their older cultures – their housing for example. At times, the beautiful backdrops also create a contrast to the current disturbing scene at play.

The total amount of soundtracks Kara no Shoujo had is little disappointing; at certain points of the game, you can’t help but feel the repetitiveness of some of the songs. Whatever songs Kara no Shoujo had though, is good. The songs, composed by MANYO, all have simple melodies but each of them brings the atmosphere needed at the time.

The title song “Kara no shoujo”, a simple yet sorrowful piano ballad, is a great introduction track to the game: empathizing a sense of mystery and sorrow, perfect for the story soon to be unraveled. The track “Moon World” is a relaxing track fitting for the relaxing atmosphere of the cafe. The more upbeat “Pursuit” gives the realistic sense of rush that you are actually giving chase to the suspects, though the track is also cleverly used during some other exciting moments as well. As Kara no Shoujo is a mystery murder story however, the list of soundtracks isn’t complete without some dark, mystery-instilling songs like “Cruel night”, “Egg of Neanis”, “Despair”, “Discord” and so on. At that end, other then the meager amount, and the extremely simple naming of the songs, Kara no Shoujo has a great, satisfactory soundtrack.

Kara no Shoujo is fascinating tale of mystery, obsession, sins, religion and truth-seeking. While it’s not for everyone, especially for ones who prefer a more lighter story. One who loves mystery, dark and gore however, will definitely be stroke with a sense of intrigue and entrancement. If so, do try it out, as Kara no Shoujo is quite the unique, but great visual novel. 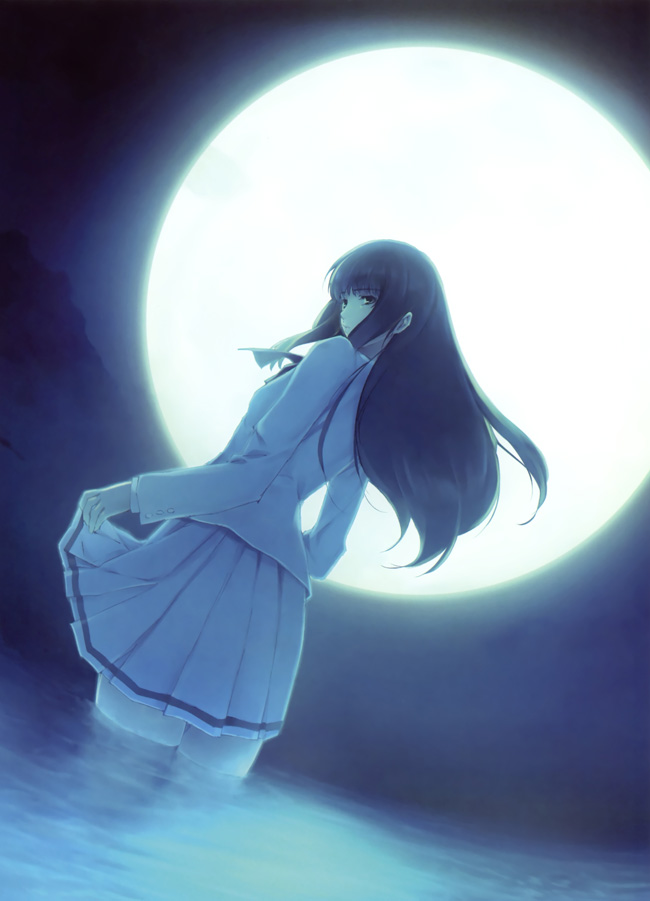 Rating
Story: A
Character: B
Visuals: B+
Sound: B
System: C
Gameplay: B+

9 thoughts on “Kara no Shoujo Review”