Some time ago, I described about my local anime community, and how lacking Brunei is in terms of things related to anime and Japanese visual culture. Brunei isn’t known to be the best anime country out there after all. No Japanese performers ever, no anime events, and a severe lack of figures and merchandises on sale in local shops.

However, I’m glad to say that Brunei is slowly improving – all the problems mentioned above, are slowly being remedied even before I knew it. Over some periods, I managed to join a few of these Japanese culture events which I noticed recently I haven’t share with everyone besides a few mentioning of it here and there, so I decided to share my experiences and compile all the local events I had been participating in one post.

Expressive Art Convention, or EACon for short, is probably the first ever anime convention to have emerged in Brunei. The event officially started in 2011, a year I didn’t even notice it’s existence. In 2012 however, I finally found out about it and joined it in December of last year.

The event took place on Saturday, starting from morning, and ending in mid-afternoon. I need to work on Saturday mornings so I wasn’t able to join the morning sessions, which is unfortunate, considering there are official cosplay performances in the morning. When I get there by afternoon, it’s already the closing sessions, though there are still a lot of people there. It’s more about walking around, checking the booths, and asking the still-not-leaving cosplayers around for some photos at the time. 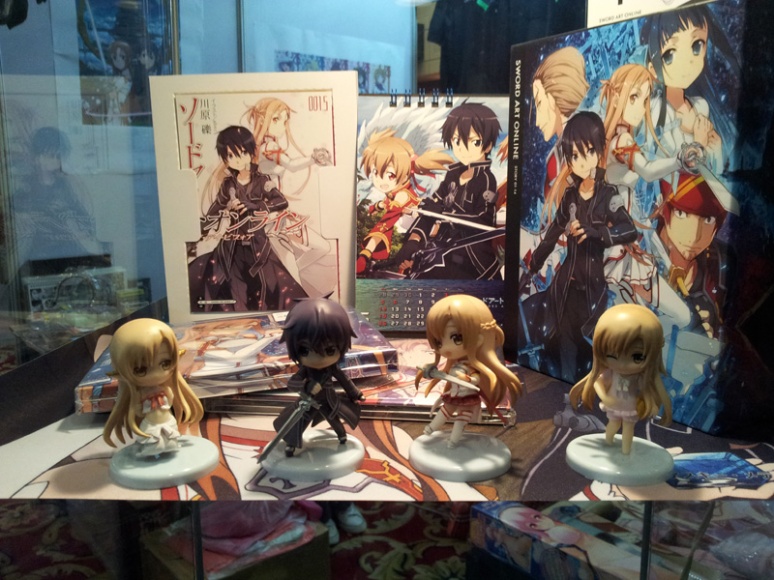 Remember how in my new figure posts, I was talking about how a store close to my town actually started selling figures? Before that, it’s either an one hour trip to the city, or the plain old online shopping for my figures. The figures booth they set up, is probably my most favorite one. Aside from figures, they also have a lot of other merchandises on sale, ranging from calenders, posters, and so on. I actually bought another new figure from their booth, which I will save it in my future figures post. 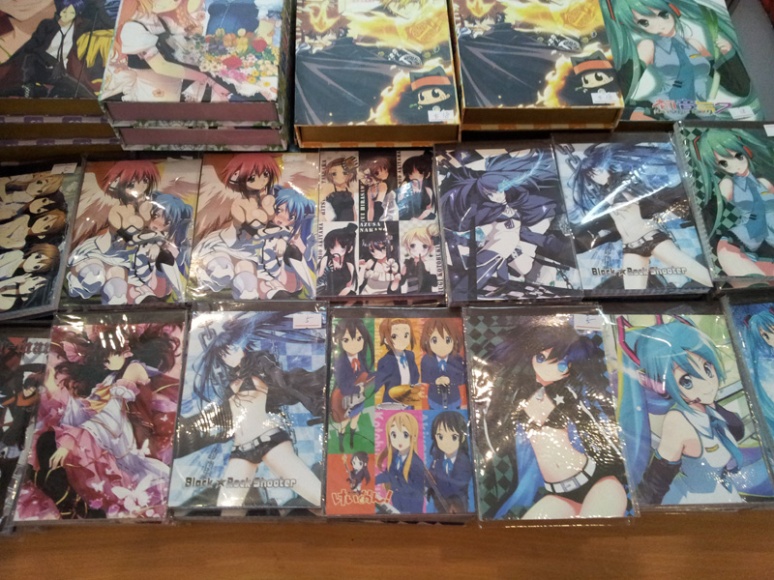 Aside from that, other miscellaneous stuffs are also on sale from other booths, ranging from notebooks, keychains, comics, manga, cosplayer costumes, Vanguard trading cards and so on. The neko headband is definitely one of the highlights of the event, though cringeworthy when I saw random people wearing them. 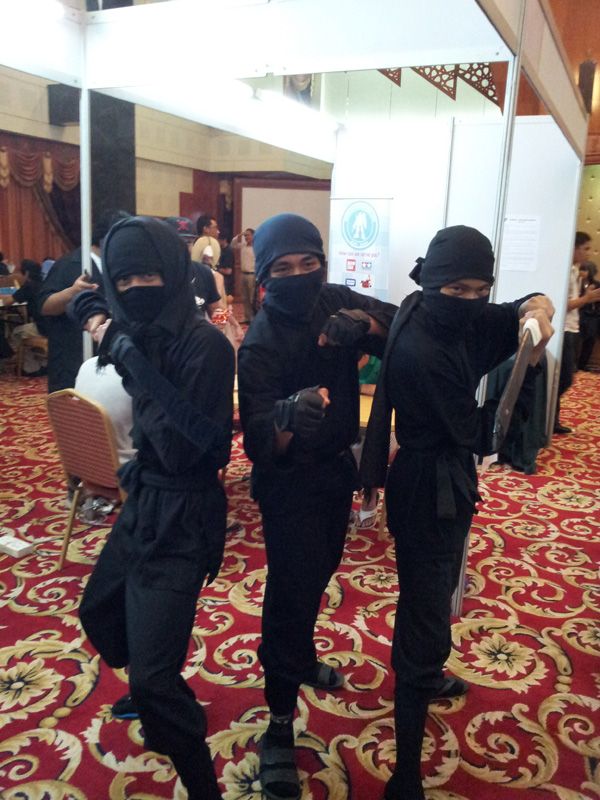 Sad. That’s the only total amount of cosplay photos I was able to take.

Another one of my favorite booth, purely just for the sake of nostalgia. Games had been graphically improved nowadays, and seeing games like these on display once more does reminded me down the memory lane when I first started playing Super Mario on the Nintendo.

In another corner of the event, some game competitions were still taking place, Street of Fighter and League of Legends most notably.

Last but not least, there are tons of Gundam models on display, I only managed to take photos of a small portion of them however. 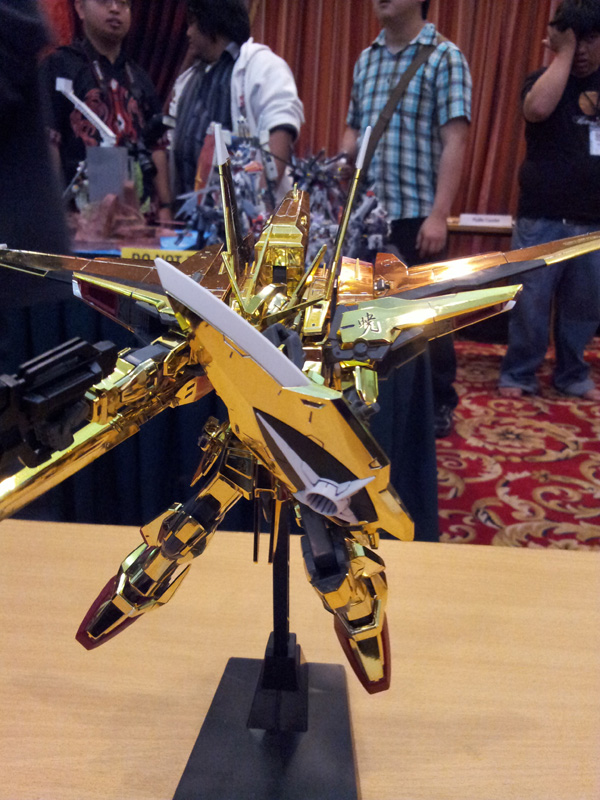 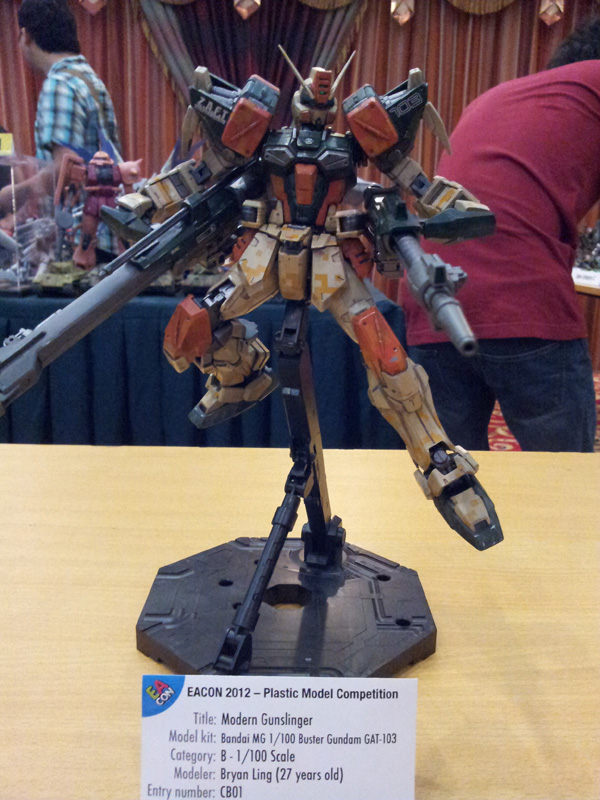 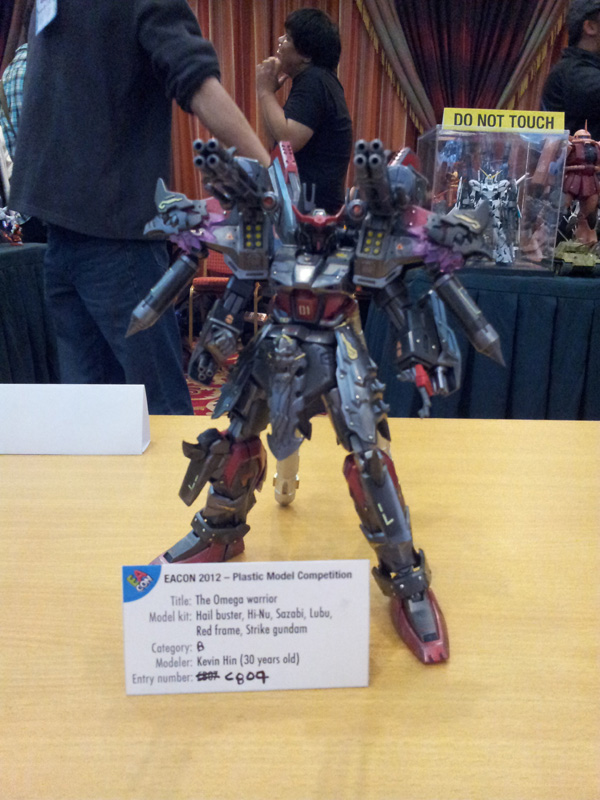 I think that’s about it for EACon. The event, although is a small event compared to true genuine convention, I had quite a lot of fun with it. I would had love to join the event in a less awkward timing however, since I wasn’t able to get the most out of it. In the end though, I won’t let this take my “virginity” of anime events yet – I would rather prefer my first one be a more major one. I guess EACon’s a good “practice” in that regard, before I go about with the real thing. 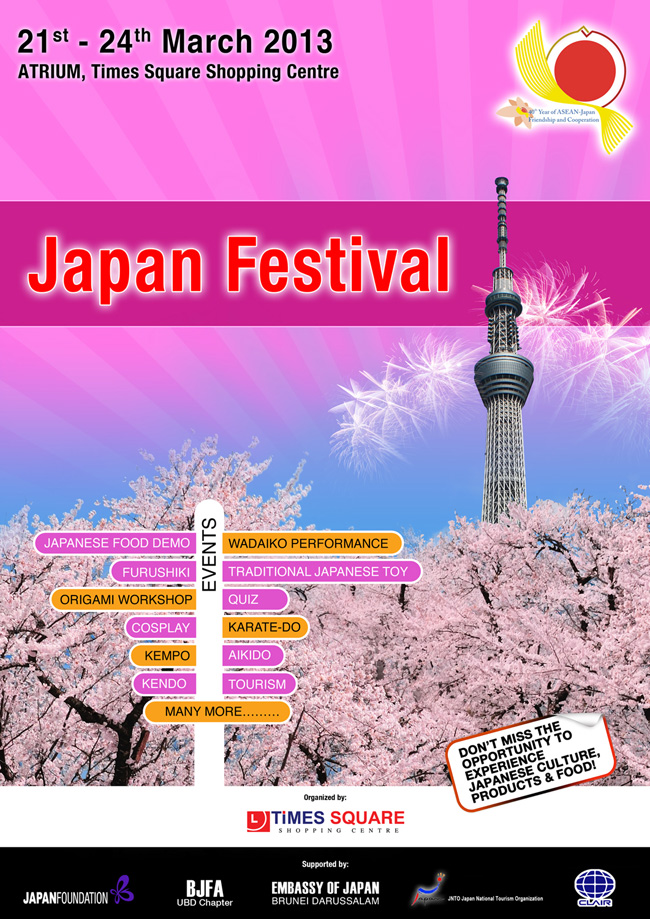 Anyway, the event this time isn’t that much related to anime, but still related on the Japan Culture majorly as a whole. This event actually took place from the 21st to the 24th of March. In each day, there are demonstrations introducing and showcasing Japanese culture, technology and lifestyle, ranging from Wadaiko (Japanese drum performances); to martial arts demonstrations like Kempo, Kendo, Aikido and Karate; and cooking demonstrations from chefs of established local sushi stores and a chef from the Japan Embassy and so on. Others like origami and furoshiki (cloth wrapping) demonstrations, cosplay are also part of the events.

As this is a 4-day event, like before due to awkward timing, I was only able to join one day of it. I missed out on quite some major things like the Wadaiko and the martial arts performances. Though I was able to join in the cooking demonstration by the Japanese chef, Tamaki-san, teaching us the art of making sushi rolls.

The origami display booth, though my eyes are attracted more to the Vocaloid nendoroids and plush dolls. Looks like it’s going to take a lot of work to do these however, especially the intricate designs of the black swan.

A Doraemon papercraft they put on the floor, had the urge to kick it for some reason.

The one and only figures I see in the event, at least, on that particular day. Obviously not for sale though, more for decorative purposes. 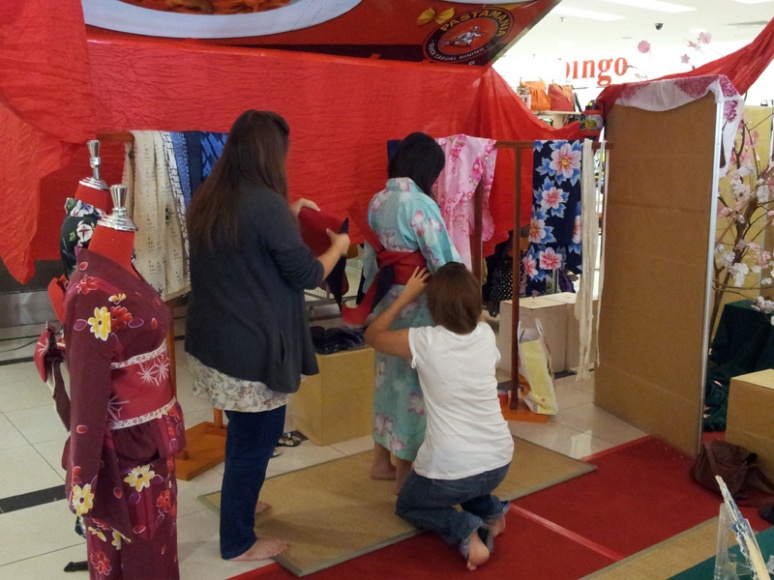 One of my favorite part of the event is definitely this however: the chance to wear yukata. Two workers will help out whoever wanted to wear it. I think it’s pretty much impossible to wear it by yourself after all, especially the tying of the obi. As you can see, the dressing area is “open”, so obviously, the girls don’t strip (will be a sight to see however). Instead, the yukata were worn over the clothes they were wearing at that moment, probably not the proper way since from what I know, yukata are meant to be worn directly on the skin. Not much to be done, since I can’t expect the girls to strip in public anyway.

The process of wearing it takes quite a while to complete, and had to be worn step by step to be able to don on it properly. It was pretty amazing, how a seemingly piece of cloth can be wrapped around and tied, and then be worn with such elegance. They don’t even need sizes as well, from the ones with a more shorter height to the ones with a taller height, the same piece of clothing can fit just fine – I guess the secret trick is the still the tying of the obi, tying huge bundles of cloth to suit a person’s shorter height, or perhaps loosing a few bundles for taller people.

This is an “artificial sakura trees area” where you can take photos on the girls after they had worn the yukata. Pretty nice, though a larger area would had done it more justice. The area is too narrow, and not much photoshoots can be done without actually clashing with other people. Fortunately, we were alone during our photoshoots, and made it just in time before the next group of people were done with their yukata.

For those uninformed, Hanamas is a duo of two young Japanese female musicians – Chie Hanawa and Natsumi Okimasu: a shamisen player and a violinist respectively. Here’s some background information on them:

“Hanamas” is a Japanese – Western unit formed in 2009 by Chie Hanawa (Tsugaru-Shamisen player) and Natsumi Okimasu (Violinist), graduates from the Tokyo University of Arts. Both have been playing active roles in a variety of music genres by bringing out the best characteristics of each instrument. “Hanamas” received the Prize for Encouragement at the 1st Neo Classical International Competition in 2010 and has been actively performing in Japan as well as at overseas.

On 14 December, they performed a medley of folk songs featuring the Tohoku region such as Tsugaru Jongara Bushi, Yagi Bushi, Akita Nikata Bushi and original pieces, LIFE, Kanon and Mozar-tokotoko -Koshinkyoku （A Variation of Turkish March） with the guitar and drums in the back.

Anyway, the concert took place at a particular school auditorium in the city. The whole performance was splendid, the two girls, backed up by a drummer and a guitarist, has great chemistry with each other, resulting in an excellent wave of harmonious melody between sounds originating from the East and West. There are some funny moments as well, especially when the girls are trying their best to speak in English, only to run frantically and shouting “Tasukete kudasai, translator-san!” moments later. Cute. When the guitarist and the drummer also made their introductions, I like the drummer’s sarcastic comment when asked about how he feels about Brunei. He replied “Brunei is hot on the outside, and cold on the inside.” Perfectly describing Brunei’s weather in one line, and got us a few laughs.

I’ll provide links to their official blog and also their live concert in Brunei here. Please note that for the latter, the videos are not taken by me. It was regrettable but I wasn’t able to take any photos or videos, since I hadn’t even bought my Galaxy Note at that time. I noticed someone took some videos for the concert and uploaded them in Youtube though, so I compiled all of them I can find in a playlist. Credits to spunkynazz, the one who took these videos himself.