A Look at My New Gadget: Dell Latitude 10 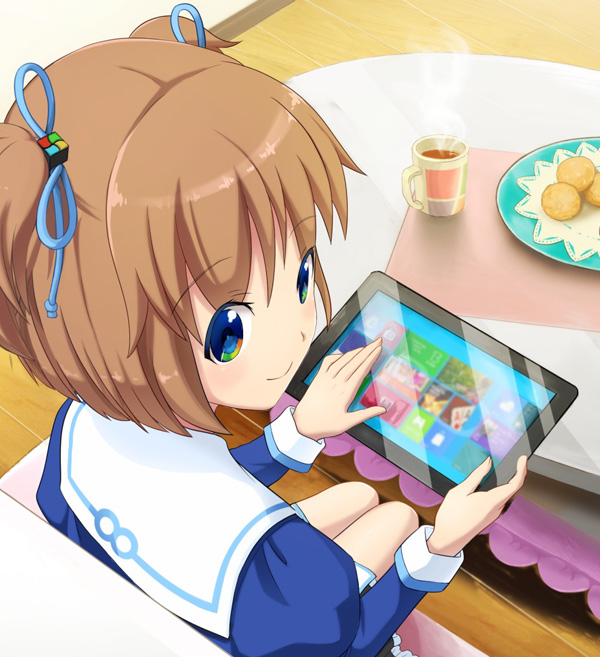 I had been wanting to buy a tablet for a while, even though my phone was already considerably big, at 5.3 inches. I still had to zoom in and out while reading manga. In terms of watching anime, I definitely had a better experience on my android phone than that of apple, however, it still had problems – it can’t run MKV properly and for some bigger sized HD videos, sometimes the audio and the subtitles won’t synchronize with each other. Then, there’s also the fact that my phone was already swamped with work stuffs.

While hunting for a tablet, I saw a Dell Latitude 10 which a nearby local store here just recently stocked in, and immediately bought it on my next payday. 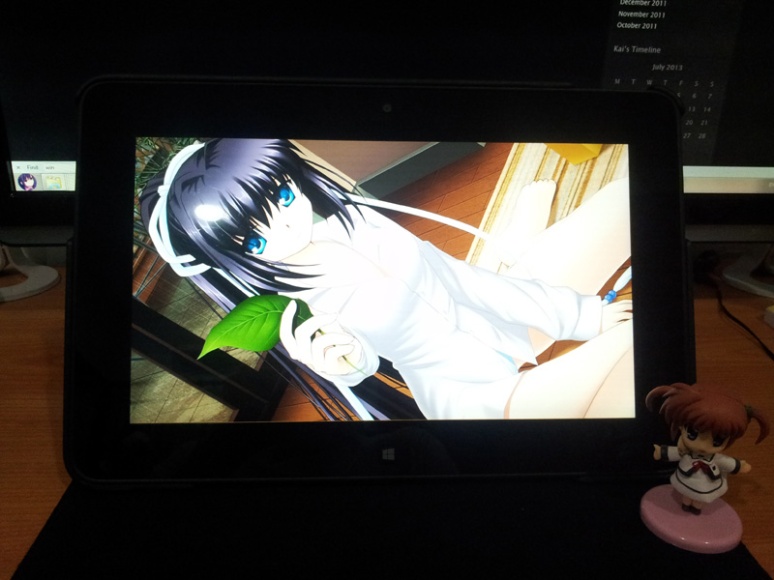 The Dell Latitude 10 has a specifications equivalent to most netbooks. 2GB ram, Atom processor at 1.5GHz, 10.1-inch monitor screen with 64GB SSD, paired up with functions which most tablets or phones would normally possess; bluetooth, Wi-fi, front and rear camera (2.0 megapixel and 8.0 megapixel respectively) and last but not least, also supports stylus. 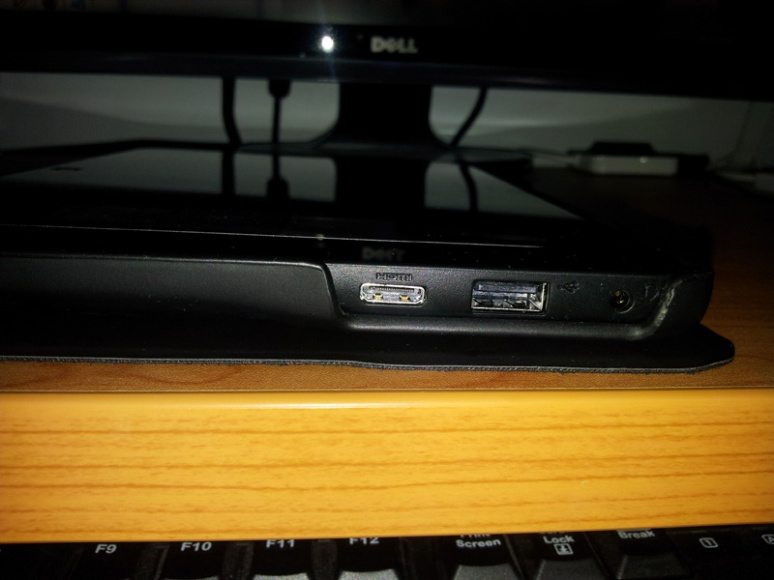 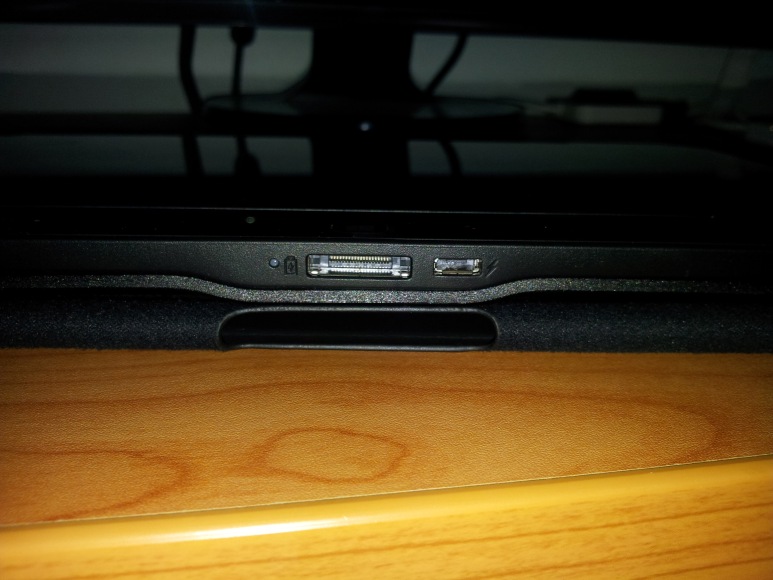 As for ports, it handily comes with an USB port and a mini-HDMI port. With how I usually use the tablet, I don’t think I will have much use with the HDMI port, but the USB port is definitely useful. Unlike iPads or Galaxy tablets, I can easily just plug in my pendrive or even hard disk for some easy data transfer. As for the powers, it comes with the main port for the adapter to be plugged in, and a power USB port just beside it. Sadly, the USB power one is kinda useless. It barely draws any power in, you have to lock out your screen or shut down altogether for the power to actually draw in through USB, according to my experiment at least as I see that the power indicator only lights up after I done so.

Dell Latitude 10 uses both Windows 8 and Windows RT, and it took me some time to get used to the latter. Windows RT is like a smartphone/tablet variation, and is through RT where touch-screen interface shines. Most of the things I need to do was in the all familiar desktop, but RT has it’s uses too. For example, I can get a manga downloading app from windows store and use it mass download manga – something I can’t do with a normal desktop (I actually tried it, with minimum success). With desktop, I was usually stuck with finding DDLs, torrents or through the plain old online reading, but it’s honestly easier to just get an app which could download from other manga sites. There’s also the ability to read files like epub for all my books and light novels. 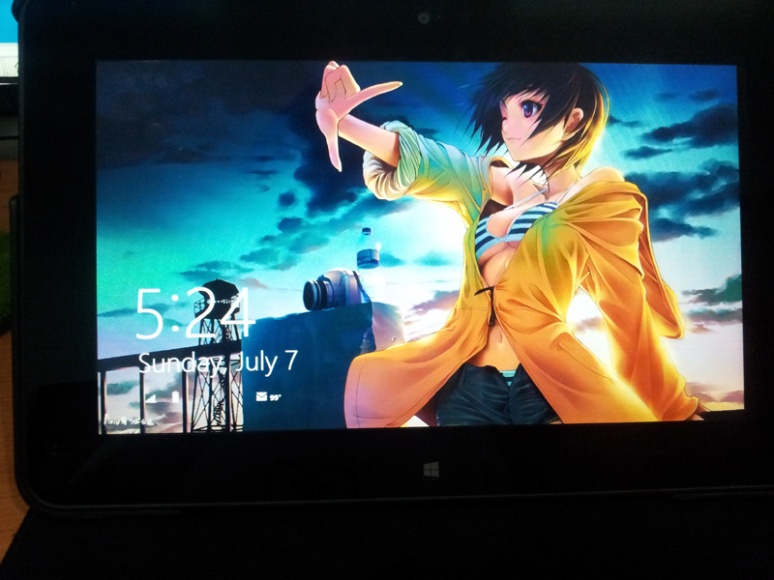 I haven’t did a lot of customizations at the moment, there are tons of things I still want to do. For one, I would love to use a custom background for the Windows RT screen, then there’s also the on-screen keyboard. Aside from using an external keyboard, I had no idea how to use buttons like “Shift” or “Alt”, since there are none. But one of the most important thing I did, as Aaeru stated, is restoring the Start orb, which you can do so using programs like Start8 or Classic Shell. This will be extremely useful for people who don’t want to switch back to RT for the taskbar. 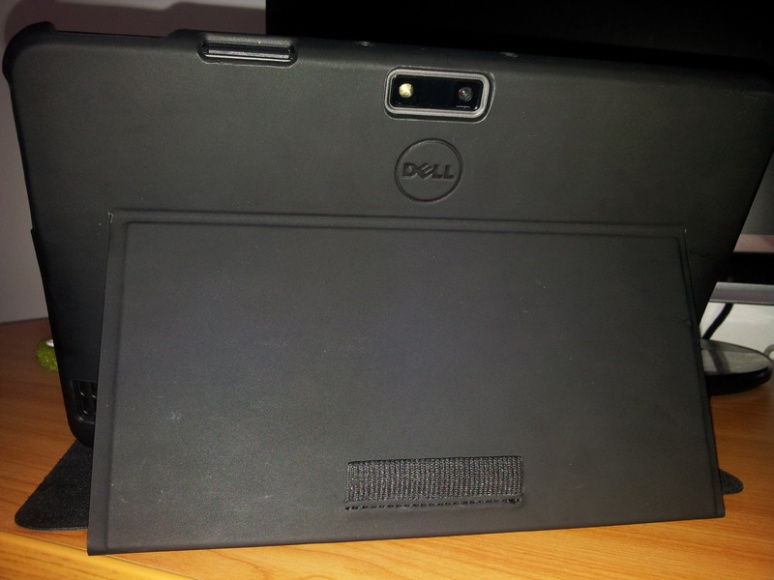 Moving on, the package that I bought barely had anything. Just the tablet itself, the casing and the power adapter. Apparently, this device is so new (here) that there were barely any accessories available for it. I had to buy another 10.1 screen protector for my tablet, which was obviously not made specifically for Dell Latitude 10. Meaning right now, the exposed bezel is completely exposed to scratches and fingerprints, and that’s the most disappointing part of my purchase. The lack of accessories mean there are no spare batteries or dock too. Oh, did I mention you can take out the casing at the back and swap around the battery just like some phones do? I obviously see no use in doing that at the moment though since I don’t even have any spare ones.

Speaking of batteries, it’s performance is another disappointing thing. When I was checking around the net, Dell Latitude 10 had been advertised as having one of the most long-lasting battery life – able to last more than 20 hours without charging. Mine wasn’t as good as advertised though, on a full charge, it lasts about 10 hours before needing to charge again – still quite strong nonetheless. 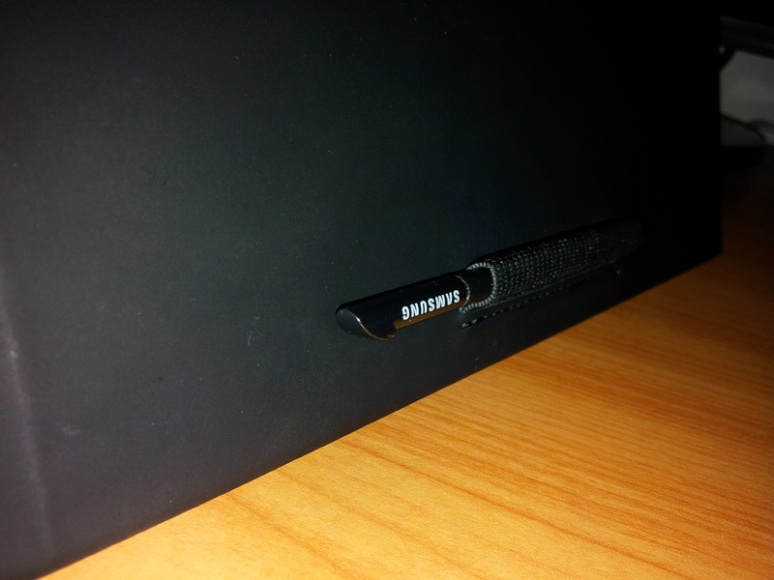 For other things I can workaround. I have tons of earphones and headphones I can use at home, and it seems like for the stylus, any types would do, as long as it’s not a broken one. I used my phone’s Samsung stylus and it worked like a charm. My casing also has a stylus holder at the back, but that’s a really awkward position. When I insert my stylus there, I’m always afraid to close my tablet and leave it flat on my table, as the stylus at the back of the casing will be at the bottom, effectively getting squashed by the heavy tablet. I suppose I can always just flip around my tablet, but that’s another weird thing to do.

Of cause, I use my tablet purely for entertainment purposes, for what I call, my pentalogy of otaku hobbies: anime, manga, light novels, visual novels and games – so my tablet needs to be capable of all of them (the latter on a lesser scale). 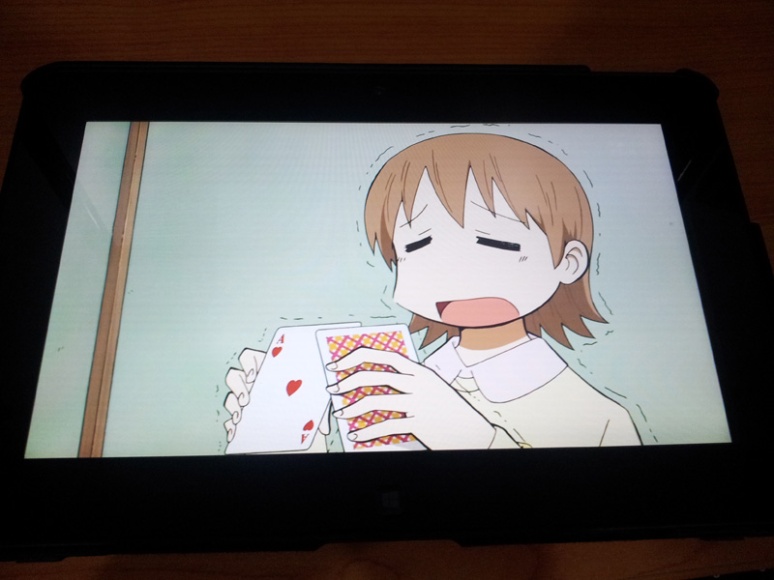 For watching anime, it’s simple enough. Going into my all-familiar desktop, I just get myself a Media Player Classic and the latest version of CCCP, then watching anime worked like a charm. VLC works fine and dandy too. I tried some of the video players apps at Windows RT but none of them seem to be able to play MKV. Tablets and smartphones sure hate MKVs for some reason, but with the omnipotent Windows desktop, nothing could go wrong. 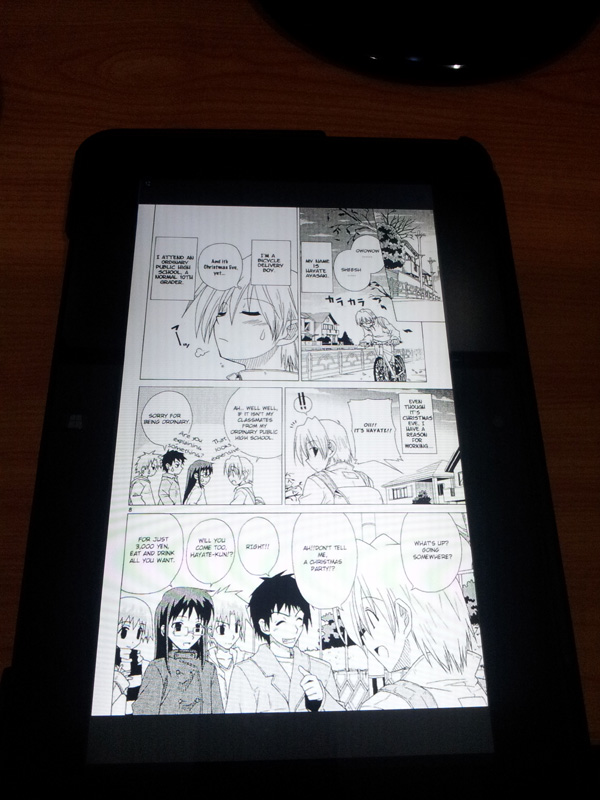 Aforementioned, I had to use DDLs, torrents or even online reading when reading manga on my desktop. For my tablet, I just installed a manga app called Manga Flow. Sadly, you can only download a limited amount of manga, so I just bought the premium version, it’s not expensive anyway, just cost about $3, and is totally worth it. There is an option to download all chapters of a manga, and no matter how many chapters I queue up in my download list, it won’t disconnect, and the speed is pretty fast too, especially if you’re using Manga Park as your main source. You can download databases of other manga sites if you want to, like mangafox or mangaeden and once done so, you can also snatch downloads from those respective sites, but it seems like the speed is the fastest if you’re using Manga Park. The only disappointing part about this app is that there is no “my library” or “my downloaded manga” or something akin to those. After you downloaded a manga, in order to read them, you need to specifically search and navigate to that very page just to read them. 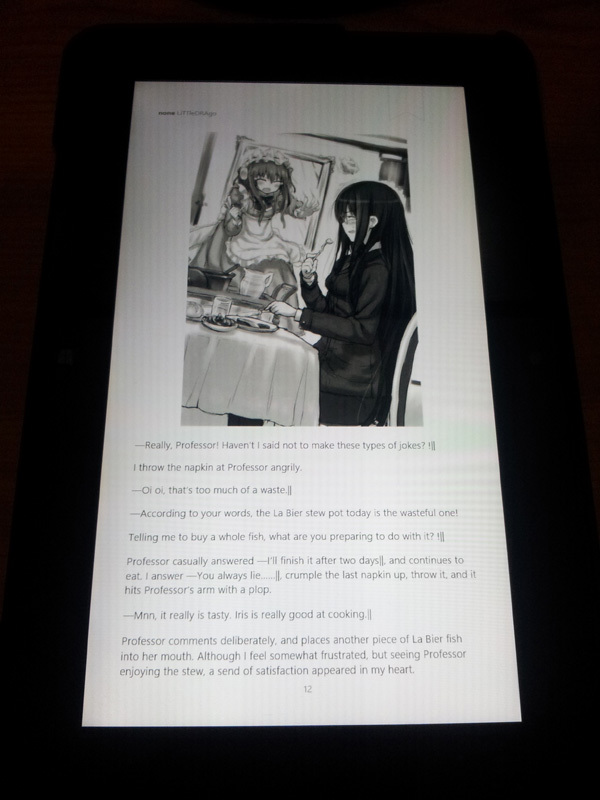 I actually had a lot of problems finding the right e-book reader. What I need, is an epub reader that have a night theme (black background and white text), can display pictures properly and can load local files already in the computer. The ones I find always seem to have problems – there is one where it only has the default theme (white background and black text), another can’t seem to load pictures properly and so on. Currently, I’m using Liberty Book Reader from RT, seems doable, but can take a very long time to load the pages, notably ones consisting of pictures. It also very frequently crashes, especially when I suddenly rotate the screen. Any other e-books apps you guys recommend? 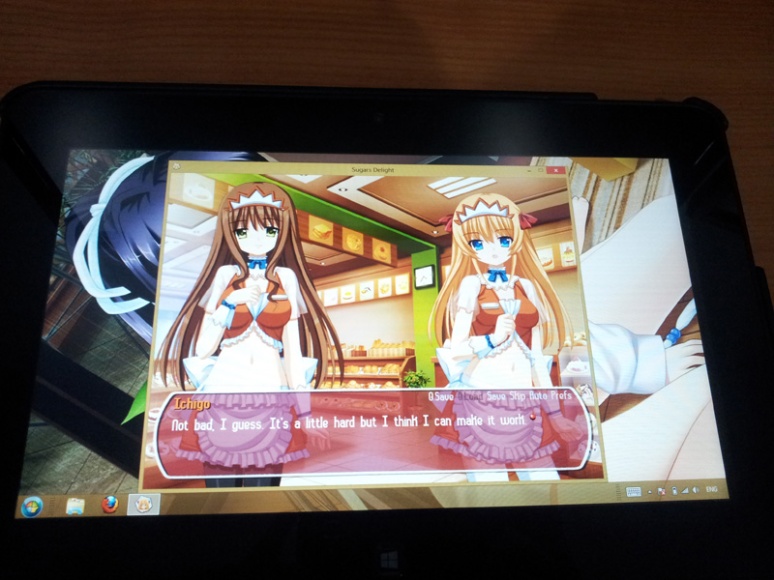 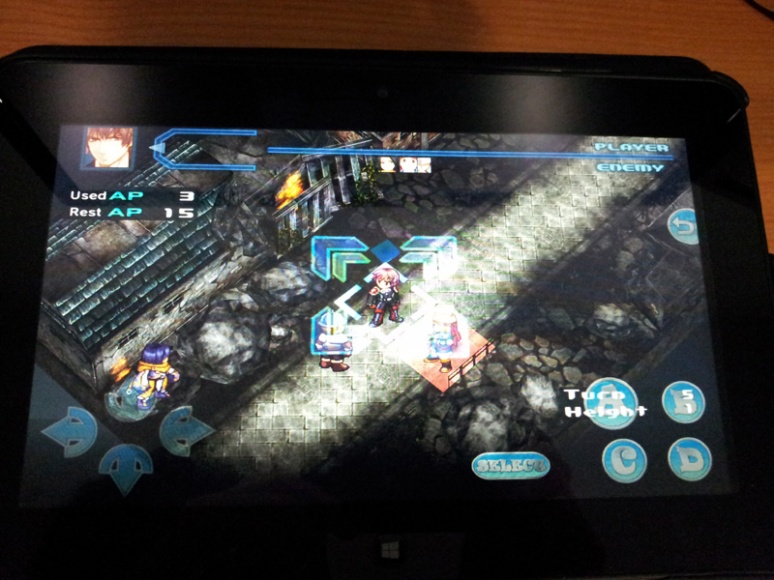 My tablet isn’t so strong that I can play modern games like Assassin Creed 3 or Dishonored (or something else along those lines) on it, and I wasn’t planning to anyway as I can do them on my desktop. I do love to play some emulators on my tablet, say DS for example, that touch-screen ability of my tablet would do it justice. I haven’t started trying it yet, though I did messed around with a SNES emulator I found in the store. I also tried some games from the windows store – Spectral Souls (bought for a whopping 16 USD), Soul Craft and Dungeon Stalker 2 were some of the notable ones I downloaded. Although in the end, gaming is of a lesser concern – if it were, I would buy an Ipad instead. 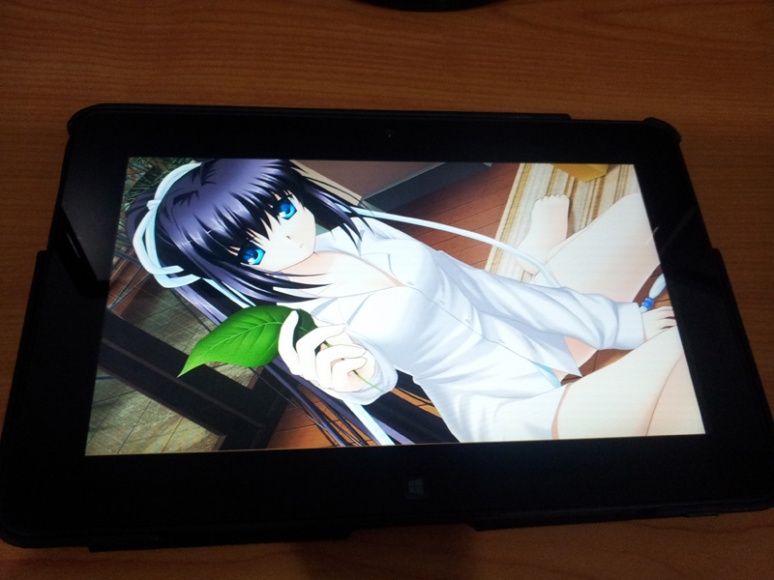 I know that windows 8 is controversial at best, and indeed, there are a few bumps here and there, but overall, I’m quite liking my tablet at the moment as it satisfies almost all of my needs.

Time to throw myself to bed and enjoy myself some anime, manga, visual novels (whatever) on my tablet…

Tags: Dell Latitude 10, tablet
This entry was posted by Kai.