The Problem with Pretty Anime

Hello, this is ZabiLegacy. I write over at Sekijitsu.com. If you like my writing I urge you to check it out.

Over recent years I’m sure I’m not the only one who has noticed that anime seems to be getting shorter. There were always 12 episode shows, but they seem much more prevalent. 50 episode anime was still a common site ten years ago, but it is now rare to see a series last four cours. A lot of this may have to do with the increasingly short attention span of audiences, but I’ve wanted to explore what trends are causing anime to be getting shorter.

Obviously the price of creating an anime is what is driving episode count down. The technology required to make anime is moving upwards, as is the amount of animators required to make a series. Furthermore, in the mid-2000s anime reached its peak with a US audience, driving down foreign money. Some may argue that an increase in piracy is a major factor, and considering how rampant it is in the foreign market it’s certainly hitting the bottom line, but a lot of the same people who torrent are the biggest buyers of DVDs and memorabilia. It could be an increase in the cost of hiring animators, but pay in Japan has been stable since the mid-90s.

I do have one more guess though.

Take a look at a few anime series from around 2003 and 2004. You’ll notice that in general the animation for the backgrounds was very bland, characters tended to have rather undefined features, making animating them much easier, and shows tended to go with solid block colors. Now most anime use shades of color in each block of color. As a whole this makes the animation in even most lowest common denominator shows nowadays look as good as some of the top shows of the 2000s.

But this comes at a price.

Remember Aquarion Evol, wacky mecha show from last year? One of the most striking details of the series was just how beautiful the backgrounds were. The series takes place in a futuristic Hong Kong and a futuristic Venice, and every frame is just beautiful. Also, all the mecha battles are ugly CG disgustingness. Now imagine had they taken all that money from the vivid backgrounds, and put it into making the show’s action more appealing. Pretty different picture right? 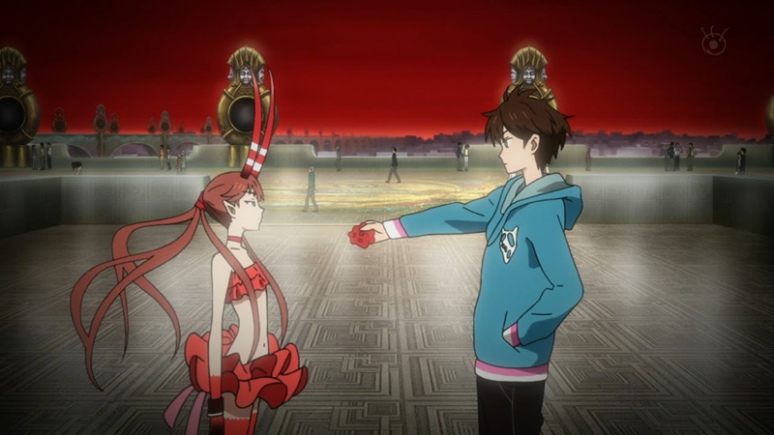 Action shows with low quality CG action is just one side effect. I’m sure many of you also remember C: Money of the Soul. It was a fun noitaminA series with a big idea behind it. It failed because the story was too big to fit into a single cour, and the most memorable aspect of the series was just how striking the character and background art was. I am not an expert on the subject, but one does have to wonder if a second cour could have been scraped together had it merely stopped itself from blowing the budget.

But, can you even not do so anymore? In an environment where every single other series puts so much manpower and cash into making sure it’s series is visually eye catching, how are you going to sell a series with a well-paced story and non CG fights if the series also happens to look like it was made in 2003? Even shows where upping the budget is nearly pointless are doing it just to be competitive. Why else would The Pet Girl of Sakurasou need to look like a work of art?

Maybe I’m seeing a pattern where none exists. Maybe it is just the end of the American anime boom drying up capital. But, there doesn’t seem to be a way that the improvement in art isn’t taking a huge toll on the budget of new anime. Beautiful animation is normally considered a good thing, but if an arms race of art quality is causing shows we love to take a hit, then isn’t it time someone re-examined just how important a show looking pretty is?

16 thoughts on “The Problem with Pretty Anime”