I believe this is the first time I joined the Secret Santa Project. It involves bloggers recommending 3 anime (TV series, OVA, movies, anything works) below 26 episodes to another random blogger, in which he or she must pick one to watch and review. The bloggers recommending them will also anonymously received other anime recommendations from another random blogger and likewise, must pick one to watch and review. For my picks, I chose Little Witch Academia. 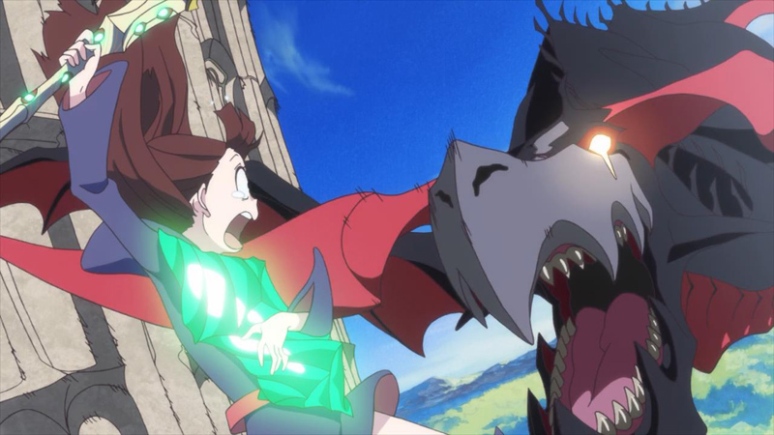 Little Witch Academia, created by the young animators of studio, Trigger, features a a world of magic and fantasy. The anime film puts you into the shoes of Akko Kagari, a student of Luna Nova Academy which is a school specifically for young witches. Boisterous situations seem to assault her in any way possible – from chaotically flying with a broom, entering dungeons and facing monsters, and she even had to defeat a dragon!

As with anime like Dennou Coil, Little Witch Academia relied a lot on it’s world-building appeal, and for the most part, it worked excellently well. The whole settings of Little Witch Academia bolsters a heavy Western influence – magic, witches, fantastical beings are just one of many Western elements among others. I would even go as far as to say the film is akin to a Disney film. Little Witch Academia’s world is entertaining and engrossing – brimming with all the fun and rowdy stuffs you would expect from a world of magic and fantasy. It is also very fun to see how their magical abilities is utilized in the world – from flying, floating, lighting, magic blasting, telekinesis and so on. As the anime film only run for about 26 minutes, the settings haven’t been explored as much as I would had hoped for unfortunately, and if it were to turn into an anime series somewhere down the line, this is something I would love to see more.

For one-shot medium like this with incredibly short length, in most cases, it’s pretty hard to develop proper character developments, in fact, it’s not even the primary focus. In Akko’s case though, it’s done decently well enough. From all the students who came from magical families, Akko is the only one who isn’t from one. She has qualities in her character which one wouldn’t normally associate with magic, acting as the perfect contrast to the rest of the characters; thus creating an empathetic and immersive experience – and is the hallmarks of a good protagonist. Although the cast is a bit too large to develop on all the characters in just 26 minutes, that means at the very least, the characters at their very base had to be fun, quirky and likable to bolster it’s character appeal, which I feel the anime film was able to done so considerably well.

Little Witch Acedemia looks and sounds like a Disney film. Technically-wise, animations features smooth and fluid motions – most majorly during the more fast-paced sequences. The design of the characters and other main subjects also had the look and feel of other anime, but also has designs that differs it slightly from other standard anime – especially in the way the visuals and animations are handled, the result is cartoonish, but it matches well with the wacky atmosphere. The use of bright and vivid colors enriches the world too.

Also, for an anime film that relies on world-building aspects, the backgrounds are drawn exceedingly well. For example, the academy – it has an architectural design that represents Western mansion during the medieval ages, the interiors likewise, also has a classy and prestigious ambiance which reinforces the Western artistic appeal.

The anime film features fully orchestrated soundtracks, which flexibly shifted it’s tones accordingly to all the different situations. From the gloomy to the mysterious and to even to the hopeful tones, the orchestrated pieces work excellently – it captured the essence and even strengthened the emotions of the situations quite well. Although at major portions of the series, the film would go on for long periods of time without any background music and if you listened closely, evidently, it seems like there are not a lot of music composed for the film either.

No matter how capable the animators are in compressing their content in just barely half an hour, there are indeed definitely interesting things left out due to time restrictions – more of the academy, more fantastical creatures and so on. The film even introduced certain subtle elements that would even work in a TV series. Despite the time restrictions however, what the film was able to give us, was already quite an ample amount of pleasurable viewing experience.

I enjoyed Little Witch Academia, probably more so then what I would originally expected from a film only intended to train greenhorn animators on-the-job. In just 26 minutes, the film provided us with a wondrous and fantastical journey of magic and fantasy – it’s Harry Potter, “anime-fied!”

P.S: The results page is up. 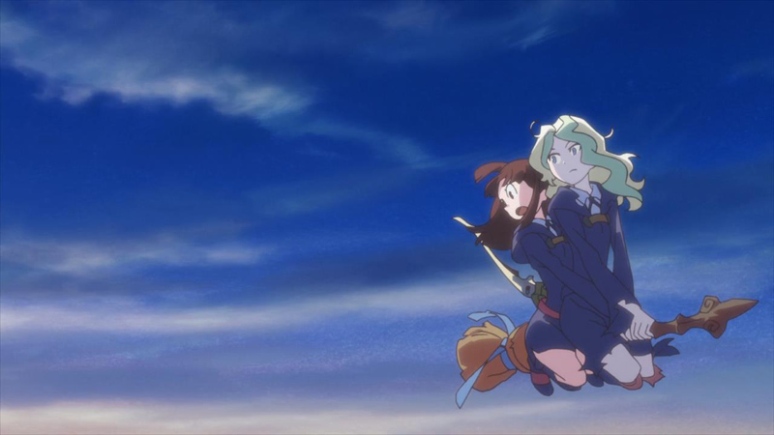 Rating
Story: B-
Character: B
Art: A-
Animation: A
Sound: B+