The Art of Tsundere-ism in Rakudai Kishi no Cavalry

Rakudai Kishi no Cavalry, or just “Rakudai” henceforth for this post is a current airing anime of the Fall season, and it’s really released at quite the perfect timing-writing this post, I feel like I’m contradicting with some points I made on my previous post where I ranted about light novels and their over ambitious natures. Let me elaborate though.

Wow. This is refreshing. Is it just me or is this LN protagonist actually likable? #rakudai pic.twitter.com/2Zu47NYeNz

Rakudai from what I can see, seems like a pretty standard action/supernatural themed light novels, with obvious harem/ecchi elements in it-so basically, your standard LN flair, but there’s just something different about it from the two episodes I had watched, just /slightly/ different from the usual LN tropes, just slightly. I’m not going to lie, the above series of pictures is what got me into the anime almost immediately, I mean, let’s face it, has there ever been any LN protagonists who can act like that in generic LN ecchi scenes? That, and this particular MAL comment got me interested, I haven’t read the LN though.

A big part of why I feel like this is indeed how the characters act, which feels slightly different from standard LN archetypes. Ikki needs no further explanation I assume with the above example, but let’s talk Stella. Actually, hell, let us study this ecchi bath scene near the end of episode 2.

So, I had watched this scene numerous times (for the sake of science!) and I realized why it’s so different from standard LN bath scenes-for one thing, this scene involves a tsundere.

You know, in this trope, the heroine will have to possess “the tease” archetype in order to pull this off, or perhaps other similar archetypes I might not be familiar with. Because if you seen the video, it’s the female character here who WILLINGLY approached him, and Stella is a character who’s a far cry from the aforementioned archetype as you can get, she’s a tsundere-someone who CAN be shy.

But let’s stop talking about LN antics and character archetypes for the moment, and talk a bit about real life bathing etiquette. In real life, there’s no way any people with common sense would just barge into another person bathing who they barely even met right? I’m well aware Japanese has a etiquette of bathing together, but to my knowledge, that only applies to the same sex or if it’s from the same family. Ikki and Stella are neither, Stella herself isn’t even a Japanese.

So getting back to the bath scene, and considering the character archetypes, I think you can get where I’m coming from. Stella is a tsundere (although it feels like she’s going full dere mode atm), so she entering into the bathroom willingly is something I never expect. If this is other LN, the dynamics will be completely reversed, with the heroine bathing and the LN protagonist ‘accidentally’ entering into the bathroom. I can even figure out the context, it will be something like this-the MC would think there’s no one inside since the door is not locked, and the lights inside the bathroom will be switched off for no apparent reason, bolstering the MC’s misconception that there’s no one inside, resulting in said “unfortunate accident”. 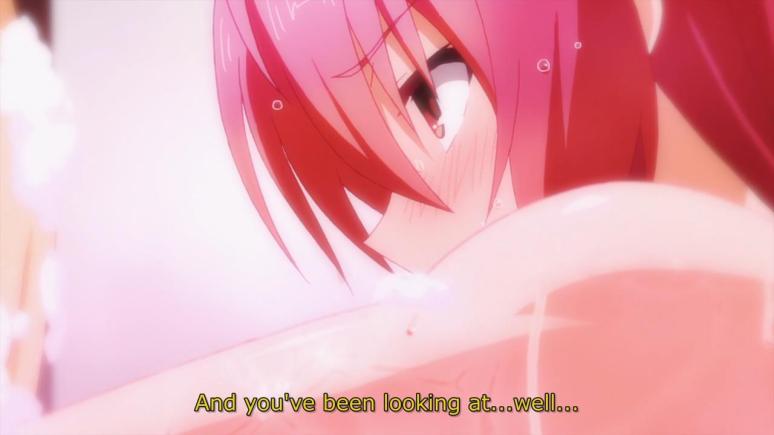 So you had been flaunting your boobs in front of him fully well aware? H-how bold ( ͡° ͜ʖ ͡°)

Stella is struggling doing something she obviously isn’t used to, so what does this tells us? Stella desires his affection, some obvious hints had been given ever since their fight from episode 1, but even more blatantly so in this bath scene. Stella never said it out loud but it couldn’t be even more obvious. I’m not getting my hopes up in this department, but if there’s one thing I hope, it’s that Ikki would reciprocate her feelings and turned into an official canon couple. Ditching the standard “dense” aspect of the LN protagonist is what I hope this anime would do-I’m totally serious, but I think this anime actually has the potential to have a natural romance development. Speaking of Ikki, it would had been hilarious if he shown more wit here in this bath scene just like that scene back in episode 1, but I guess even he has his limits.

There are a lot of things I’m worried about though, like the aforementioned “dense” aspect of LN main characters and also how fast Stella transitioned to dere. But at the same token, this IS a light novel, so I will try not expecting much either. While the scenes do feel slightly different with the characters, they are still conforming themselves strongly within standard LN tropes. In fact, there are still a lot of things in this anime which pretty much scream LN to me. Rakudai is walking a fine line between LN blandness and (slight) innovation. However, I’m still interested to see how this would progress so I will continue checking out the anime regardless. I think at this point, I don’t even mind if the anime’s over-ambitious just like it’s peers, I’d be happy if there’s even some sort of conclusion on the romance department regardless of the story on the forefront.