I rarely use Steam myself (only ever used it for screenshot), but if there’s one thing I’m appreciative of — Steam has given visual novels a more mainstream attention. This however, comes with a price.

Before I go on with the finer details, I want to say this first-visual novels have really gone a long way as far as mainstream focus. As compared to back then when English-translated visual novels could be counted with just your two hands, nowadays a lot of visual novels have gotten widespread attention. And that’s right, we all have Steam to thanks to for giving this medium a platform to release these localized titles. Some visual novels I thought would never see the light of day in the English-visual novel community, are actually translated to my pleasant surprise-the latest example being, Tokyo Babel. In fact, I can only see the situation improving from here.

Releasing visual novels on Steam is a really good idea. I never thought I would see the day where gamers would play famous visual novels like G-Senjou and Clannad. Doing this helps reaching out to more people who perhaps weren’t even familiar with the medium in the first place. Nowadays, more and more gamers are also playing visual novels, something seriously unheard of during the early days of my venture into the medium.

Sakura series — arguably the most popular OELVN series in Steam now despite it’s shortcomings. Admittedly, it’s artwork is good, perhaps the only redeeming trait however.

Steam is indeed a good platform for visual novels, perhaps “too good”. Because it’s an open platform, it’s also easy for just about anyone to create their own content in it too. Now don’t get me wrong, I appreciate well-made OELVNs when I see some, but most of the works I have seen do not reflect what’s good about visual novels in the slightest. In fact, sometimes, you quite literally have to dig through the sea of subpar OELVNs just to find the good titles.

I honestly don’t want to shit on them too much if I can, but they just don’t seem particular amazing from the ones that I came across. Even worse, some visual novels like those from the Sakura series is just the epitome of poorly-written stories (if you can even call them that) and fanservices-and this creates a stigma in the visual novel community, as if this is only what the medium has to offer; which is definitely not something you want, considering that visual novels already took a herculean effort to persuade people that sex and fanservices aren’t the only things they have to offer, releasing titles after titles with incredible stories; and this situation with Steam just turned everything back to square one.

“First off, let’s be completely honest about this: discussing literary merits of this VN is extremely pointless. The plot is way, way below average, and it’s basically little more than an excuse to string various fanservice CGs together.”
~by Ariurotl on Sakura Spirit, but I’m sure you can apply this to most Sakura titles

I mean, fine, I’m not going to lie — I’m not exactly pure either as I do like my fanservices, especially if they are at the right place and the right time. Most Sakura titles are anything but “right place and right time”, but putting aside that fact for a second, these visual novels aren’t representative of the medium; they have basically created the exact same prejudice that Western consumers from the mainstream side had been clamoring on Japanese media all these years, and overall, this is just bad for the medium. The most hilarious thing about this? Steam censors, sometimes even cut +18 content outright, so even when I said “fanservices”, these never went beyond the blatant teases, and I assume newcomers to visual novels don’t even know nukige exists.

To that end, I think the problem stemmed from Steam being a really capitalistic platform. Veteran visual novel players could only facepalmed at the sight of more Sakura titles, but they just keep coming back. Why? Because there is a market need for them. And as long as the guys at Winged Cloud keep earning some good money from these subpar titles, they would just keep coming back with more subpar titles-and the cycle goes on. As if visual novels only require that level of production to satisfy people, as if visual novels are just fanservice games; something which may appeal to some, but something which mainstream gamers wouldn’t touch like a plague as they desire games with more context rather than just fanservices. Visual novels could do both, visual novels could do so much more, but unfortunately, new visual novel players will never know the capabilities this medium could accomplish. 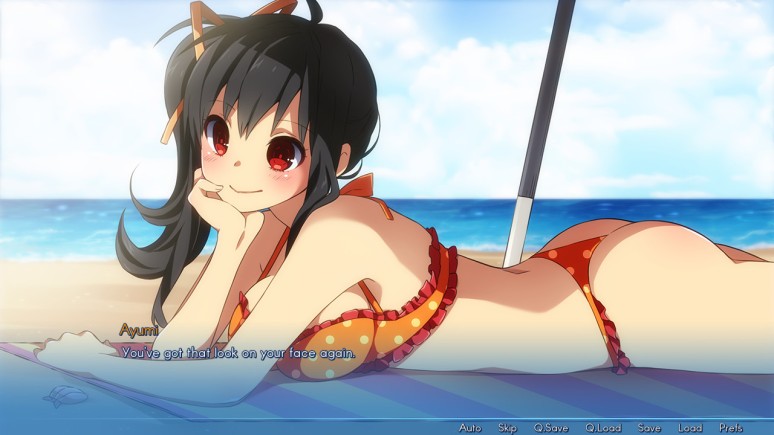 Yes, a look that isn’t so sure if I should laugh or cry at the current situation of visual novels.

And if you’re new to the whole visual novel phenomenon — and you’re reading this review –, I want you to know there’s much more to this medium. So, so much more. Don’t let something like this make you think this is all there is to VNs.
~by Gare from his review on Sakura Spirit

To that end, Steam as a platform for visual novels is like a double-edged sword. It is an excellent platform for developers and translators to release their works, allowing the medium to spread to a more wider audience. At the same time, because Steam is such an open platform, many subpar titles are produced, some so bad that they just create a stigma for the medium. I guess you just can’t gain anything without sacrificing something in the process. Visual novels in the process of reaching out to more people via Steam, has eventually established a bad image on itself-that “visual novels are just fanservices” even though the medium is just capable of so much more.

When all is said and done though, Steam is still a necessary tool to help expand the medium into the Western fanbase. I can only pray that more people would pick up great titles on Steam like G-Senjou; because the ones they are probably more familiar with, are just not reflective of the medium at all.

17 thoughts on “Steam – A Double-Edged Sword for Visual Novels”