Now I want to go into topics which is a little beyond of what we are normally familiar with moe. I mentioned that the term “moe” is very synonymous with “cute girls doing cute things” which I allude to the earlier posts. That might get you asking, what about “cute boys doing cute things”? 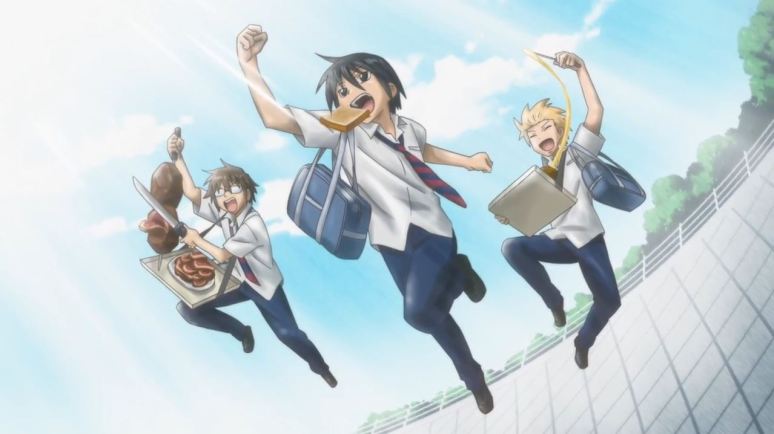 Yes, as it turns out, they exist. Shows like Danshi Koukousei no Nichijou, Meganebu, Kimi to Boku and Tsuritama feature mostly all-boy casts as opposed to the usual all-girl casts, and they are pretty much the same thing — a slice of life comedy, just with the gender exchanged. This is interesting too because it makes me realize something, when you get down to it, moe anime is all about slice of life, character-driven comedy — and you don’t necessarily need an all-girl cast to do it. I think the term “cute girls doing cute things” even emerged because the genre was often more commonly, and still is associated with all-girl casts, although we are starting to see that changing too.

Indeed, just like with anything, moe is constantly evolving and likewise, designs on guy characters nowadays can get as cute, or even cuter than the girls. Hell, there’s even a magical boy show in the form of Binan Koukou… but I will refrain from discussing that as that’s kinda opening a whole different can of worms.

Point is, and I know I’m kinda contradicting myself here but I feel “cute boys doing cute things” show is as much a moe anime just as “cute girls doing cute things” is. The thing about moe anime, is that their moe antics is genderless. A moe anime with an all-girl cast doing things like participating in club activities, eating lunches on the school roof, strolling around the town in summer or throwing snowballs and making snowmen in winter, is just as interchangeable with an all-boy cast. The ultimate objective for both is still the same — constructing an environment of fun, pleasantness and excitement in everyday lives.

This is interesting because moe has always seemed like it belonged to an extremely specific subgenre but it’s not only until lately that we see it evolved to such a degree. This makes me think that moe is definitely capable of much more than people give them credit for, and indeed aside from gender changes, the evolution of moe has also created another rather unique subgenre… which I will get to in the next post.