12 Days of Gintama – Day 9: Why I Like Gintoki – The Perfect Protagonist for Gintama

Reminder: He is the protagonist.

Gintama is unlike any other shounen. Instead of focusing on making their characters stronger and even better as a person, it just seems like the more the show progresses, the more shittier the characters become. In a way, Gintama is sort of an anti-shounen show, and who better to represent an anti-shounen show like this than our favorite sweet tooth samurai protagonist.

When you think protagonist of a show, you think the sort of character that possess all the moral judgements, attitudes and mindset that is reflective of the nature of the show. Well, not Gintoki though! As the guy is a far cry away from what you would expect as a shounen protagonist, but as an “anti-shounen” protagonist? Pretty much a match made in heaven.

Even from the way Gintoki dresses, he looks like he’s half-assing between eastern and western styles, not knowing if he should dress fully Japanese to represent the show’s samurai world or fully Western to go against it. He looks like he hasn’t comb his hair in months and thinks not wearing one side of his sleeve is cool. The “samurai” likes chocolate parfait and strawberry milk, to the point that you feel the only thing Japanese about him is his name. Gintoki is also very lazy and live an absurdly carefree life. If Oreki Houtarou has an on-and-off switch for his laziness, then laziness is Gintoki personified. He has a pair of dead-fish eyes and looks stoned 24/7. He obviously reads a lot of manga though, judging from his vast knowledge of countless references. Furthermore, he is petty and complain a lot — all for comical purposes, of course. And being a man of adult age, he often offers advice to his younger acquaintances, even though I’m sure he has no idea what he’s saying half the time, resulting in much hilarity. 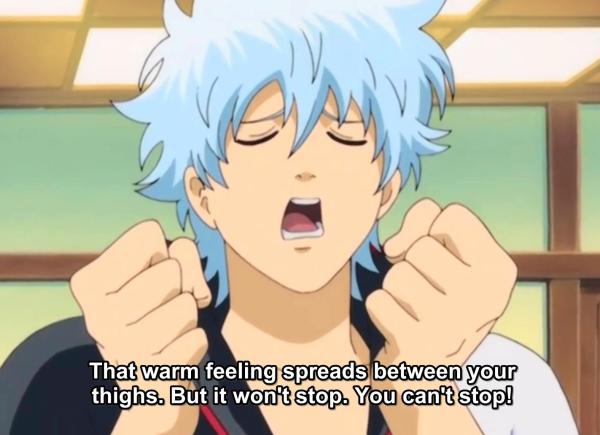 Gintoki’s “pep talks” are one of my favorite things.

Just like with everyone though, Gintoki has a serious side of him that he doesn’t normally show during comedic episodes. When shit hits the fan and his friends are in danger, Gintoki will ditch his silly side, arm himself with his sword and fight to protect his friends with a ferocity unmatched reminiscence of his Shiroyasha days.

And I may sound contradictory now, Gintoki’s serious side is literally a shounen protagonist. He values his friendship more than his loyalty to the country nor adherence to the samurai code. His inability to protect his friends in the Joui War still haunts him in his present day and is one of the main factor that influenced his current lifestyle. 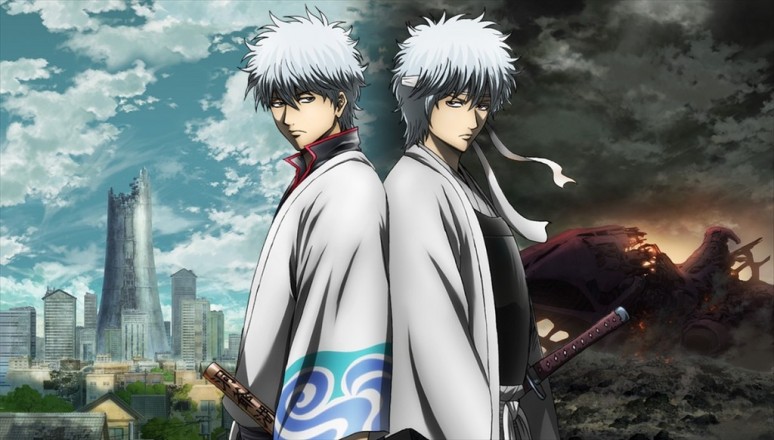 Nonetheless, I like how Gintoki isn’t just a straight out goody two shoes protagonist. At first glance, he doesn’t look like someone you would expect to be a lead in a shounen story, but hidden deep within his body is a fiery soul with a passion to protect his friends that is just as much an equal to any shounen protagonists you can find.

This kind of duality in characterizations is what I find interesting in Gintama, and it doesn’t just apply to only Gintoki but to a lot of it’s characters as well. Aforementioned in my previous posts, just like how the show has both a funny and serious side — characters also possess many different shades to their personalities which don’t normally surface themselves.

But anyway, to encapsulate my point, Gintoki is an interesting shounen protagonist. He’s not just a goody two shoes shounen protagonist, he has flaws — and I mean a whole lot of them to the point you just question if he’s really a shounen protagonist at all. He’s lazy, he’s petty, he complains a lot, he makes excuses. But when his friends are in danger, his “silver soul” awakens from it’s slumber, and he would take down an entire army to save them.

Gintoki is both a human and a superhero. The fact that he has both such a shounen and non-shounen sides to his character makes him the perfect protagonist for a show with as many facets as Gintama. Gintoki is the hero that usually complain and whine at first, but is a hero that will save the day when needed. After all, a true hero only comes at the nick of time right?