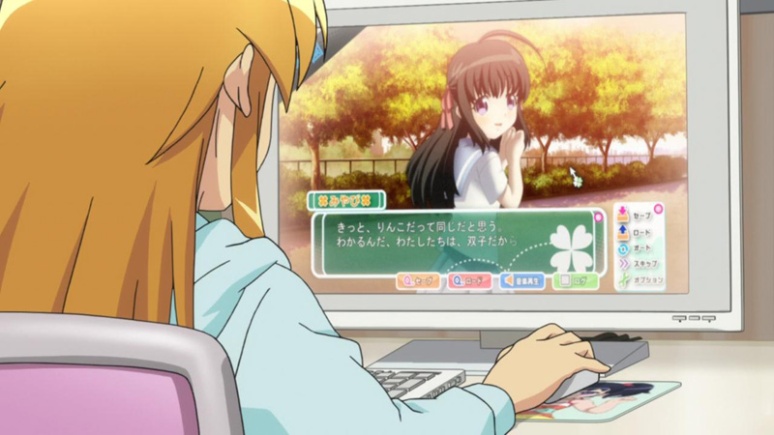 We all had our roots in our fixation with the Japanese subculture. We were introduced to anime watching through classic old shows like Dragon Ball and Sailor Moon. We were introduced to manga through classic titles like Ranma 1/2, Doraemon, Yu Yu Hakusho and the likes. My history with visual novels go as far back to when our household just had a PS1 a long time ago. That day, after getting the console, marked the day I started gaming for real (before that, I only played a few obscure PC games). Even so, it was not even until later that I come across these visual novels in PS1. Even then, I never knew they were called visual novels at the time, and just called them “Japanese cartoon games”. The design structure – the sprites, the dialogues on the bottom, the background, it seemed somehow familiar, but I just couldn’t quite describe them properly other than calling them “Japanese cartoon games”. There was also the fact that these games were completely in Japanese, and I could barely even recognize a few kanji (“recognize” in a way that I knew them as Chinese words, thus, it’s meaning, but still did not know how to properly read them as Japanese) so I obviously couldn’t even attempt to decipher these complicated moonrunes before, thinking they were some kind of secret codes.

I didn’t stumble upon them in a long while since than, not even after we bought a PS2, not even the day we got a proper internet connection at our home. However, the latter did help immensely in my discovery of visual novels. After a lot of my friends had quit playing a MMO we were active in, I decided to stop as well, and started watching anime. Later, I discovered anime charts, and since than, had been following new anime each season, while trying to keep up with some older titles. It was also around this time when I also started joining anime forums.

Ironically, the anime community on one of the forums I joined, was brimming with visual novel players, even when I initially joined for anime discussions. In fact, I would even say more than half of the active members at the time were visual novel players, which was actually unique, since other anime forums barely even know about them. One of my good friend and forummate on the site, introduced me to them, and recommended me a few good titles. If I’m not mistaken, I think this was around 2009, it was the time when I finally know the proper term to called these “Japanese cartoon games”. It was then that I noticed there were quite a lot of visual novels already fully translated at the time, providing more accessibility for people who couldn’t read Japanese. Perhaps during the period of time from my PS1 days to 2009, a lot of translations were being done unbeknownst to me. I was really excited to try out a medium which I couldn’t had a chance to play before. I never left hope as I struggled and kept brainstorming how to install my very first visual novel – patches, updates, cracks, mounts, language locale; there were a lot of things to sort out.

After successfully installing it, I played my very first visual novel, Fate/Stay Night, and was left almost speechless by the time I finished it. I was amazed by the fight scenes, which I originally thought is going to be inferior to anime with motion capabilities; I’m astonished with it’s level of character psychological study, showing me a level of perspective, immersion and characterization which any other media just to pale in comparison; I’m fascinated by the grand-scale storytelling, intrigued by the premise, the system behind it, the attention to detail and the list just goes on. Visual novels showed me a new dimension to the Japanese subculture that I had never noticed before.

I was instantly hooked by then. After Fate/Stay Night, I played other mainstream titles which were also fully translated. I was in awe of the beauty of ef, especially with it’s beautiful visuals and music. I feel the uniqueness of Ever 17’s sci-fi story, and if I’m not wrong, it was indeed one of the first visual novel that uses such storytelling design, a design which would work best only in visual novel format. I was disgusted at Saya no Uta with it’s extremely detailed grittiness, both visually and mentally. Each visual novel I played seems to evoke different kinds of views and emotions. Of course, throughout all these major mainstream titles, I also play visual novels with lighter tones in between, as a “break” of sort, for example, Osananajimi wa Daitouryou, Hinatabokko, and the likes.

On 2010, and even on Christmas too, comes one of the greatest gift ever, a finished translation patch of G-Senjou no Maou – it was one of those visual novels I really wanted to play after seeing it in vndb and hearing people who played the untranslated version praising it. G-Senjou no Maou was indeed as great as I had expected, I was always a fan of psychological series where characters try to outwit their opponents – G-Senjou no Maou is exactly such kind of visual novel, yet, something more. There are constant exciting, mentally gripping scenes, but there’s also the feels, the emotions the characters felt from their struggles, and there’s the very endearing, conclusive ending. Just like the protagonist with his dual personality, the visual novel is just so good at showing us different shades of emotions at any given time.

I never forget to “wind down” however, and pick lighter visual novels to play whenever possible, and I especially needed one after such a quality, extravagant experience from playing G-Senjou no Maou. I think it was around this time that I discover the Sono Hanabira series. Before this, I had been looking for ages for a yuri anime/visual novel like Sono Hanabira, one which doesn’t just have yuri undertones, one that is only purely about two girls loving each other. No drama, no magic, no actions and certainly no weird fetishes like tentacles or d*** girls. Just as soon as I had given up, the discovery of Sono Hanabira was like finding a tiny oasis in a massive sea of sandy dessert. Sono Hanabira has all my needs, all my specified “ideals” and uniquely acquired tastes of yuri; it has them all, which just makes me appreciative of the visual novel medium that much more. Since then, I had been periodically prowling through the translated Sono Hanabira titles one by one in a gradual manner, getting my yuri fix, and getting fixated on my favorite yuri couples of Sono Hanabira, and occasionally, some nosebleed here and there, and checking my sugar levels.

At some point, I started learning the Japanese language due to my fondness for visual novels. I memorized hiragana and katakana, and decided to tackle kanji by playing visual novels. I played a few titles like Cure Girl, Yosuga no Sora, Furifure 2 in this manner. Ironically, instead of checking and studying the kanji I saw on screen, I just breeze through them using machine translators. I opened up my electronic dictionary in hope to learn some kanji, but I found myself clicking through the screen at lightning speed regardless, guess I just can’t help myself when there’s an already convenient translator right in front of me, embarrassingly. I didn’t know what came over me at some point, but I even played visual novels like Bloody Rondo and Dies Irae, the latter completely not suitable to a greenhorn like me, as I wasn’t even able to understand 90% of what I read on screen. In short, a failed endeavor, and as a major amount of my time was also spent on other media like anime, manga, games and novels, I decided to put playing untranslated visual novels on hold for now, as I could barely even keep up with the translated titles as it is, let alone untranslated titles. 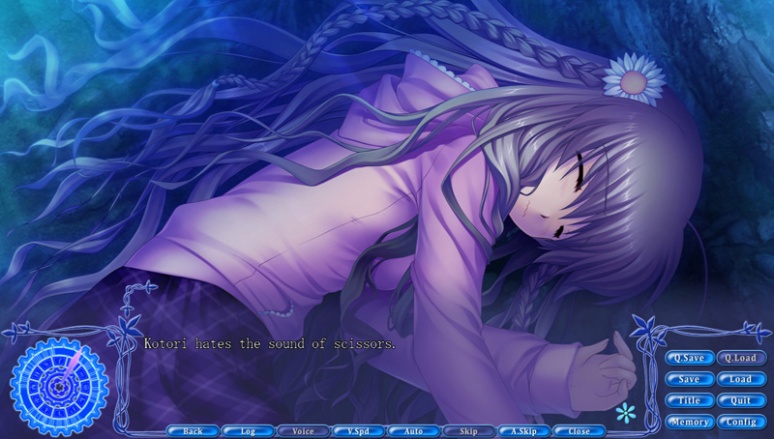 The later parts of my visual novel history involves frequently visiting sites like fuwanovel and erogedownload to check out for new translated releases that interests me, and also playing old visual novels recommended before which I still haven’t had the chance to play. I finished Little Busters, Deardrops, Kara no Shoujo, Rewrite, Grisaia no Kajitsu and a dozens of translated visual novels at this point, all great titles in their own rights. At this point, I had changed a new desktop computer to replace my extinct one so I was able to play some visual novels in full + widescreen format, providing they support such resolutions.

The last major visual novel I had played for now is the Muv-luv trilogy – Extra, Unlimited and Alternative, which was as lengthy as playing three different visual novels at once. Still, playing Muv-luv is such an emotional experience, a level of empathy I had never once felt to such a degree, perhaps exceeding even G-Senjou no Maou. There are the relaxing slice of life moments, yet, there are also exciting moments, especially during the fighting scenes. There are also those extremely shocking moments, and the constant fear knowing that your comrades could die at any moment, and the despair that you share with the protagonist. Earlier, I mentioned that each visual novels seem to evoke different kinds of views and emotions, but Muv-luv here is just such an emotional series that you would just about experience any kinds of human emotions throughout the series-joy, wrath, disgust, despair and the list goes on.

Although quite a time-consuming medium, I can still see myself coming back for more, more.. and more, prowling through my massive backlog of visual novels gradually, which include visual novels like the newly translated titles – I/O, Cho Dengeki Stryker, Ayakashibito, to older titles I had yet to play like Planetarian, Narcissu, Umineko and the likes.

What’s your history with visual novels?