The Legend of Heroes: Trails in the Sky Review

JRPGs are always one of my favorite genres, and as far as PSP goes, The Legend of Heroes: Trails in the Sky, a game which was just released in the states this year, is probably one of the top JRPG games I ever had the opportunity to experience. 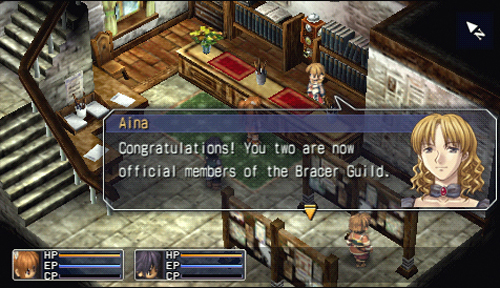 The game is set in the kingdom of Liberl. In a small town called Rolent, an energetic duo, Estelle Bright and Joshua Bright can be found, who are the children of Cassius Bright. The Bright family had been a family of bracers, a guild of people who helps people on a daily basis. Cassius’s kids are no exception, who were both aspiring bracers as well.

What makes the game so great in the first place? I would say the story first hand. The story was presented in a slow but steady manner. It first started calm and slow, and first follows the two leads, Estelle and Joshua, as they were finishing off their last final days of school training before genuinely started doing bracer assignments. The story started shifting off into a mysterious vibe, with their father suddenly disappearing out of the blue and with both Estelle and Joshua setting out a journey to look for him. Obviously not as it seems, during the course of their journey, answers were revealed but in place, more questions sprung up. Ultimately, the conspiracies kept piling up and the disappearance of their father becomes clearer and clearer.

The game also created really wonderful lead characters, Estelle and Joshua. Both of them have really contrasting personalities, with the former being hot-headed and rush into battles in full frontal force while the latter is more cool and collected. Due to this contrast, both of them makes a wonderful combination, be it hilarious bantering, supporting each other or fighting against enemies. The developments between these two characters is amazing, especially in the romance subplot department. The other characters are just as noteworthy too, especially the sadist and the hilarious bard. 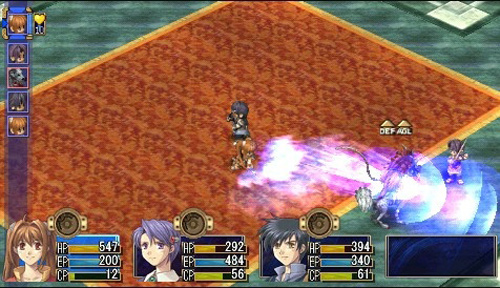 Gameplays in the game are just as good as it’s stories, especially their well-thought battle systems. In fact, most of the battles, and especially some of the boss fights, require careful preparations and strategic thinking in order to beat them. The battles themselves are turn-based, and each characters can be moved around the field as long as it is within the grid. Aside from attacking, you can also use orbal arts (the game’s equivalent of magic), crafts, character’s unique special attacks and S-crafts, the ultimate form of crafts.

The system behind orbal art are again, quite well thought out. All usable magic comes in the form of quartz, which you could use to equip on your character, if he or she has any empty slots (maximum slots per character is 6). When you start out, you can just simply equip them and blast away. However, further into the game when you gained access to new and stronger orbs, you can start lining up the huge variety of orbs in a specific order to learn even newer spells. These different magic works wonders, some offensive spells hit single targets, while some target multiple targets, then there’s healing spells and even the passive spells for self defense. Aside from getting new spells, the quartz are also good for buffing up stats too, for example, physical characters like Agate and Zane should be equipped with Fire quartz and Earth quartz to increase their strength and defense respectively.

Each town provided a list of quests for players to complete, some optional quests, and some story quests. It is important to do as many quests as possible, be it optional, or story, as they are important for certain merits: BP, mira and even a few rare accessories. Interestingly enough, the game also introduces the cooking system though it’s disappointingly ordinary. Characters can have a bite in random restaurants or cafes, and by eating, they will know the recipes and the way to cook them. Logically speaking, not sure how that works, but cooking is a more better alternative for healing balms anyway, as food items made from cooking provide some other interesting effects (Str+, CP+, etc..)

The game’s graphics area alluring in their own rights. The 3D environments and detailed architecture looks good, and both these elements make exploration around the world fun and exciting. One can always has expectations of how the next town or city would look like, and the impressions the next venue gives you would almost never disappoint. The characters who appear in SD forms seems oddly fit too for one reason or another, but what’s even more amazing are their expressive portraits during dialogues. The soundtracks are good too, some of the music are calm and soothing, while on some occasion, the game pop up a lively Celtic tune for exploration.

The Legend of Heroes: Trails in the Sky is the first part of a trilogy, and because of that, the ending is barely conclusive, since many mysteries were still left behind unresolved. There are still two more games in the series and I will definitely check them out once a Western release is available.

Ultimately, The Legend of Heroes: Trails in the Sky is a wonderful game with one of the most captivating plots ever. To those of you who owns a PSP and is a fan of RPG, I suggest giving this awesome game a try.

Rating
Story: A
Character: A+
Gameplay: A
Visuals: B-
Sound: B

14 thoughts on “The Legend of Heroes: Trails in the Sky Review”