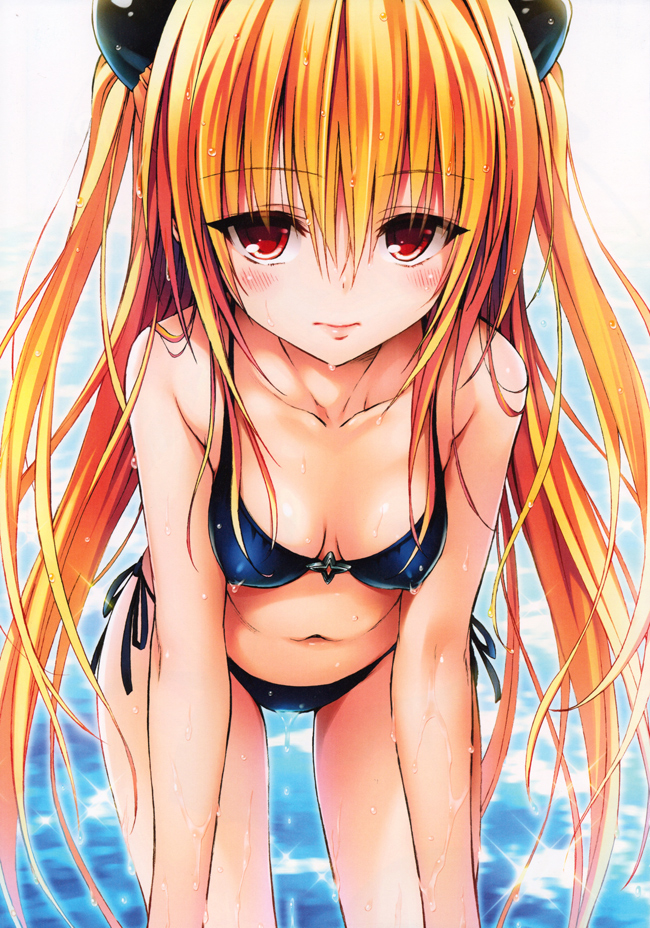 English name: Golden Darkness
A dispassionate, withdrawn assassin, Golden Darkness is hired by one of Lala’s arranged suitors, Lacospo to kill Rito, until she breaks the contract, noting the true nature behind her target. Golden Darkness is currently staying on Earth, roaming around the city streets and Sainan High, with a motivation to continue her duty to assassinate Rito, although she has yet to accomplish this (hinting she only said this as an excuse to stay on Earth, which is then confirmed). Commonly referred as “Yami-chan”, she spends her time reading books and magazines, while eating taiyaki (it is the only thing she eats on Earth since it is the first food offered by Rito, prior to spending a night at the Yuuki residence for a sukiyaki dinner). By her planet’s calculations, she is 24 thousand years-old (as shown in season 1 where the job applicant stops Konjiki no Yami just before she was about to say ‘thousand’), despite having the appearance of an 11-year-old (albeit a rather mature one), although this is only mentioned in the anime and has a weakness towards anything slimy.

Like Lala, Golden Darkness’ physical abilities are exponentially stronger than a human’s. She carries a unique ability to turn her body parts into various objects through use of nano machines circulating her body, ranging from swords to dragon heads. Unfortunately, excessive use becomes a hazard to her health. She states she hates “ecchi” people, and does not hesitate to assault a person who looks at her in an obscene way, even if it’s her own fault like when she was using her abilities to increase her bust she attacks Rito when he saw her, mostly out of embarrassment or for many occasions standing at the top of something such as stairs where her panties could be seen by accident. She has also stated, that she doesn’t understand if she can feel love and all its wonders, though she slowly becomes closer to Rito once seeing that he is a good person.

I found out this figure since sometime ago through amiami’s popular item ranking, and only had some free time to unbox her recently. Despite To-Love-ru’s questionable quality, I will always be a fan and supporter of Yami. I haven’t yet watch To Love-ru Darkness however, though I did read the very first few chapters of the manga. Incidentally, I’m also a fan of Eve, a character from another manga by Kentaro Yabuki called Black Cat – the original character whose Yami’s design is based on. So I thought, “Ehh.. why not?” and there goes another big portion of my monies… 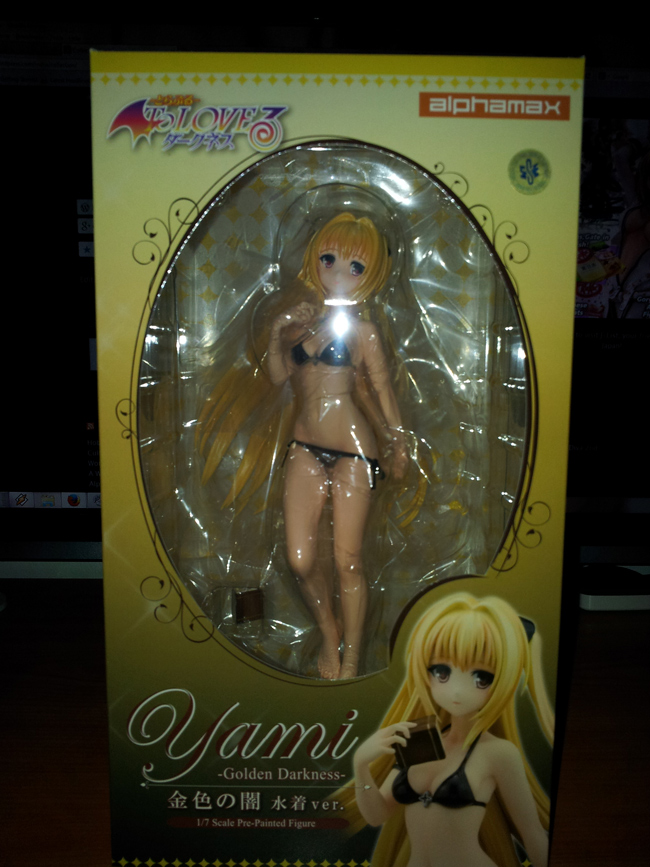 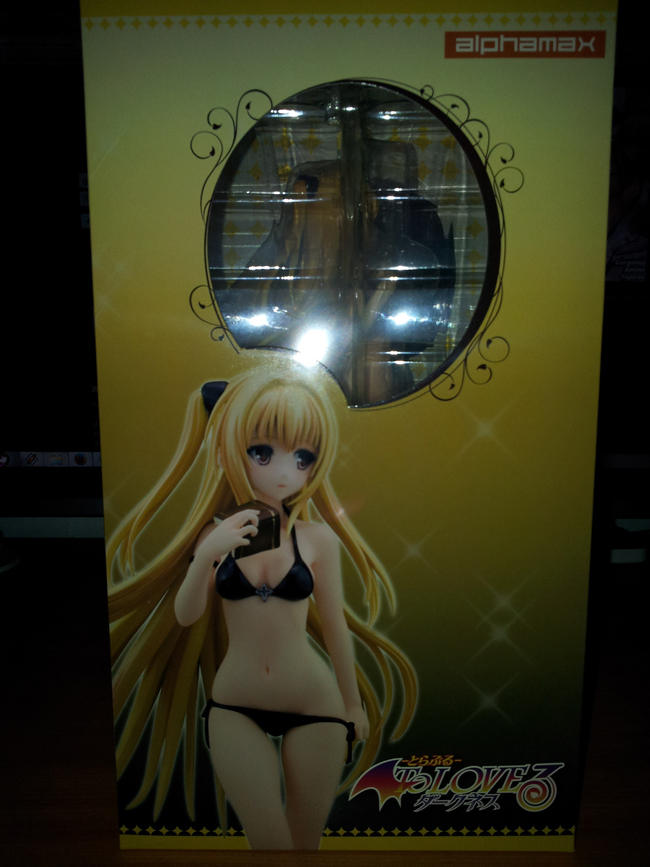 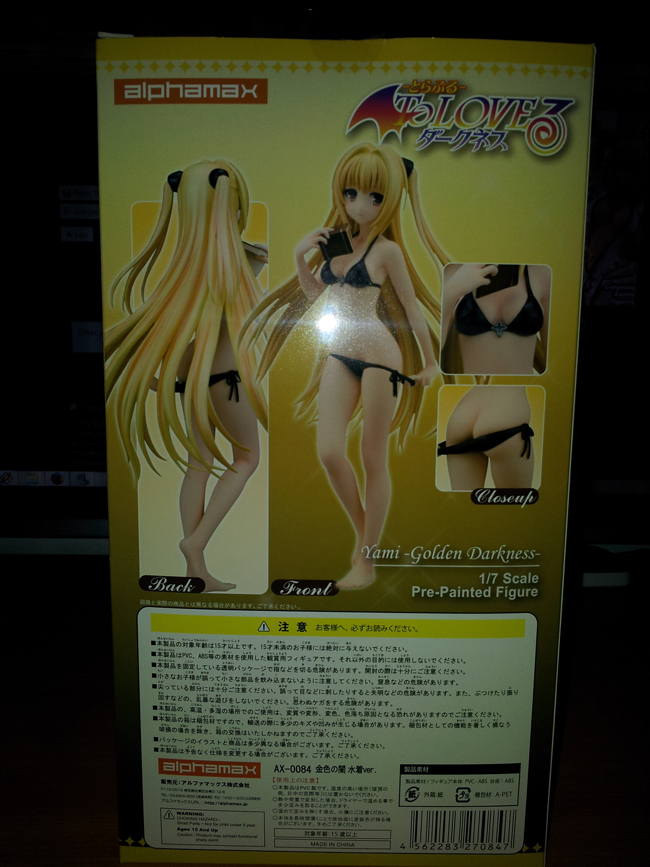 As her scale is at 1/7 with a 20+cm height, to accommodate the figure, the box is really tall, although not more wider than is necessary, meaning that her stand isn’t overwhelmingly big. The box uses a yellow color theme to match Yami’s character design. She only has one accessory – a book. 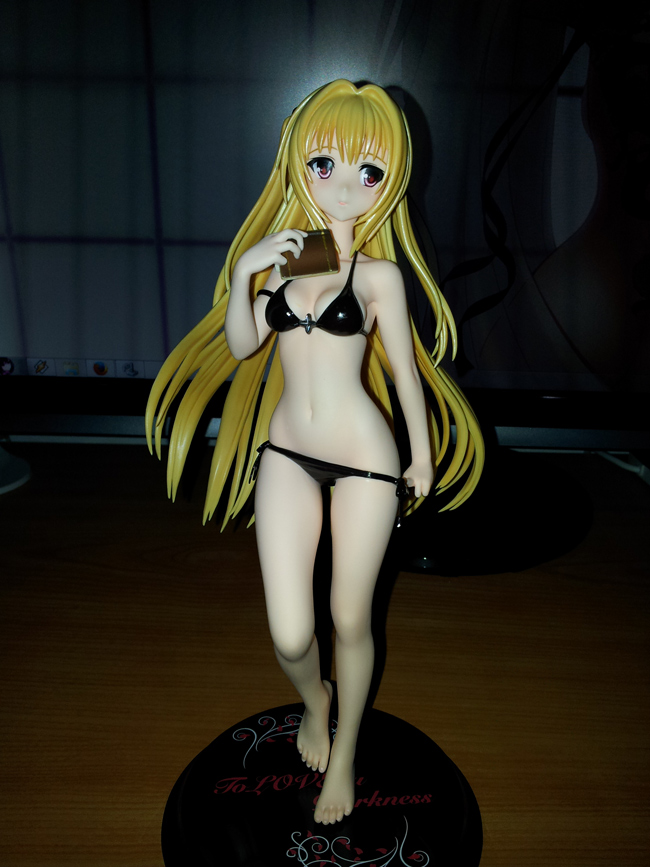 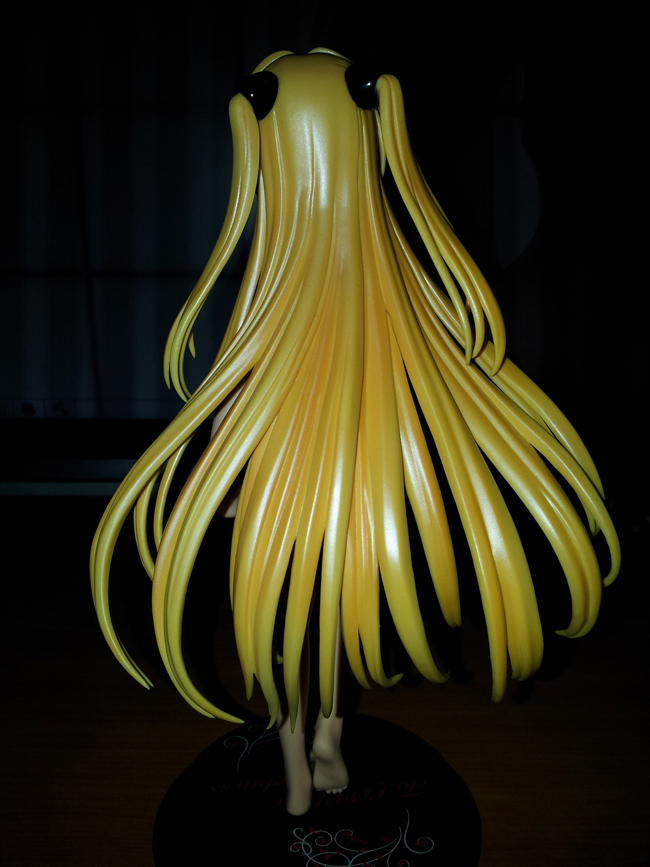 Following the original design, the figure she dons on a two-piece black bikini – string bikini bottoms and bra with a front cross hook. One thing that differs from the original design, as far as I know, is the black upper arm bracelet on her left arm/shoulder, although the addition looks good.

Her nice flowing hair on the back adds a lot of dynamics to the figure. The detailed layering on her hair is pretty well done. Additionally, her head can be detached, to fit in the book to her left hand more easier. Awkwardly, her head doesn’t seem like it just fit into one spot, and can titled a bit – having a slightly slanted position or just straight. Aside from her hair, she also has a pretty nice backside, although hard to see with her long hair, you will have to once again, detach her head to look at it.

I don’t see any major paintjob issues, and the shading’s really top-notch. You can clearly see some areas of her skin having a more stronger tone with some areas having a lighter tone, giving her a more solid, well-defined look. Both her bikini top and bikini bottoms also look very glittery, giving a leathery feel. 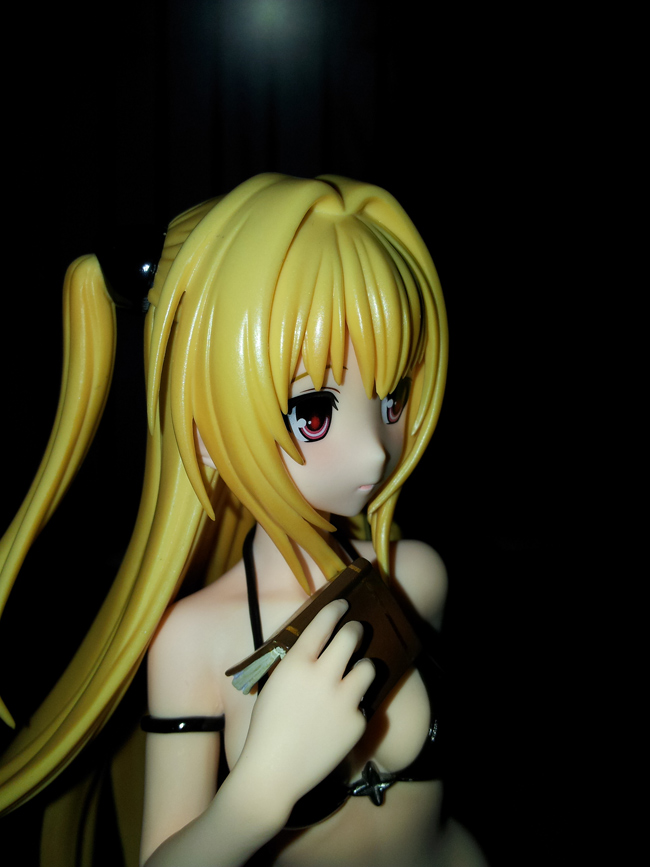 Her cheeks also has a slight blush, another great finishing touch. 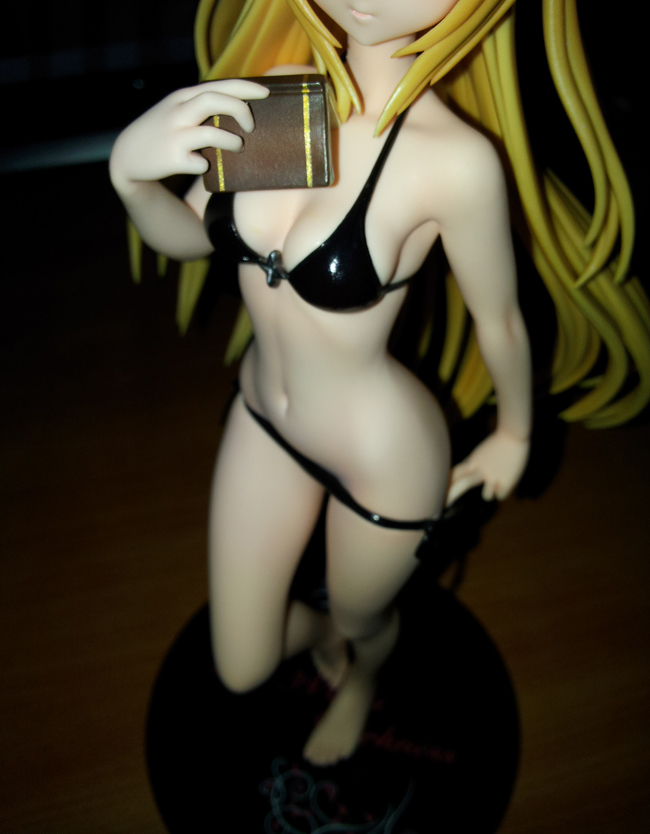 She has a really curvaceous body, despite being depicted as a loli generally, and her modest chest is lovely. Also as you can see, the way the figure is sculpted makes her look really realistic, especially the way her arms are sculptured and her collarbone. 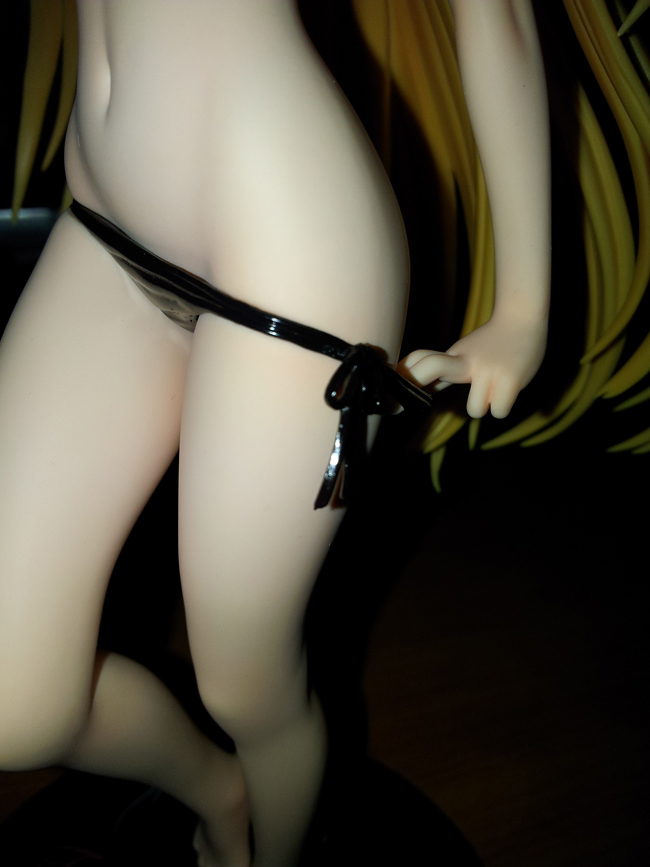 The realism spreads all the way to her legs, as you can see from the realistic sculpture of her kneecaps, the shapes of her thighs and so on. 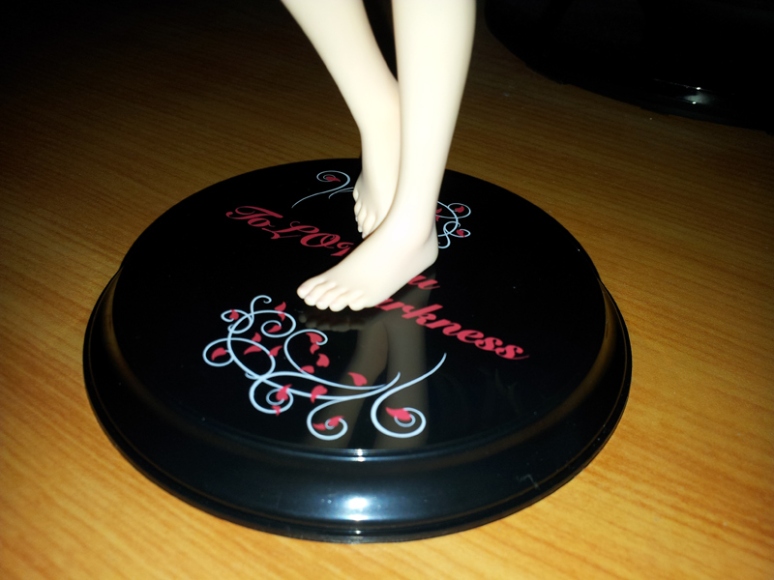 While I generally prefers a simple stand, the design of the above stand isn’t particular displeasing to look at, featuring black and red colors, two of my favorite colors, I can make do without the flower patterns though. Also, the stand has two pegs to fit into the sockets’ from Yami’s foot. The sole of Yami’s foot has two sockets to fit into the pegs, although I find a bit of difficulty to fit into them. I actually used a lot of strength just to do that, although it seems you need to tilt the figure a bit first to fit into the front socket, then tilt it back straight to fit into the bigger, back socket. At least, that’s how I did mine. If this figure really does require some sort of special positioning, I could use some guides on the manual. The manual only provides details on how to put up the book, which is, well, useful too, since there are no pegs nor sockets for the book. 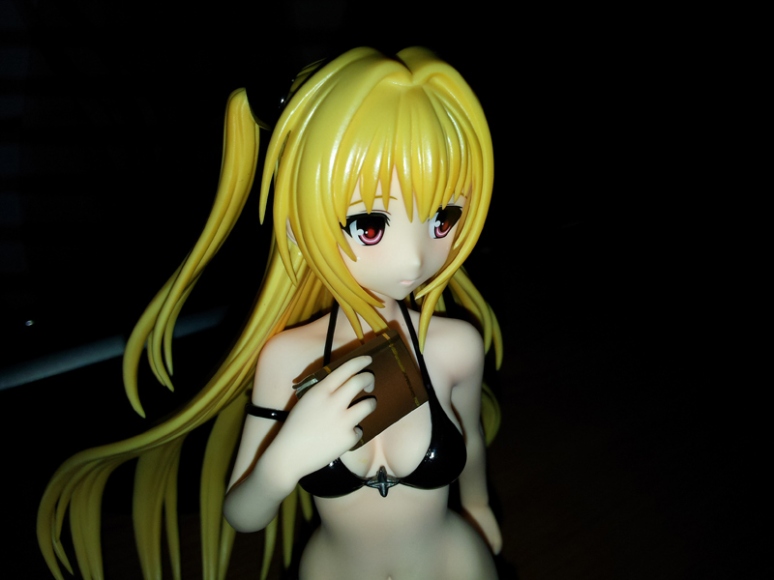 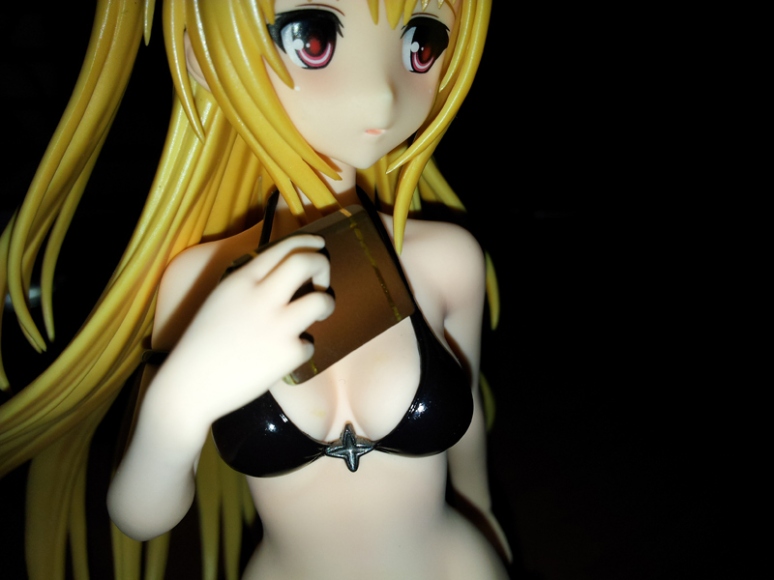 Overall, the figure has a lot of eye candy to see, especially, with her being a swimsuit figure and with her originating from an ecchi show like To-Love-ru. 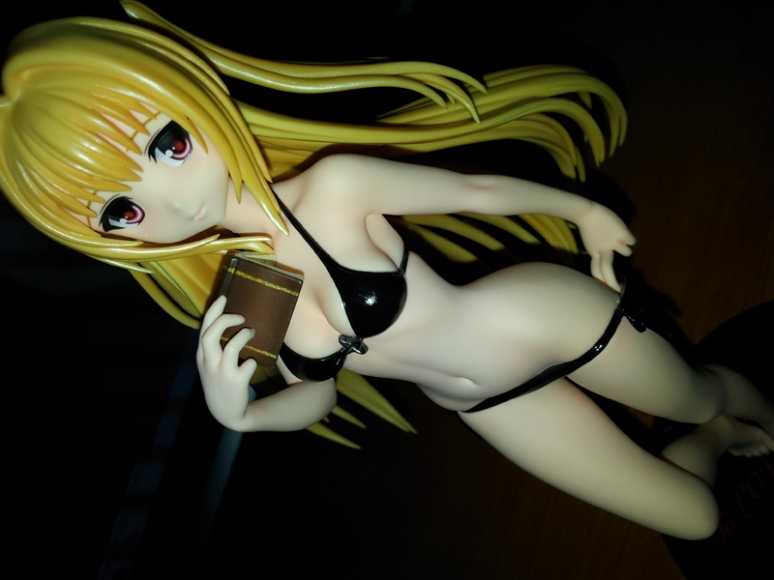 I could had sworn though, with some weird angles, she looks like she is smiling, although Yami’s a kuudere, and from all the official pictures of the figure I seen around the net, she’s definitely not supposed to be smiling. 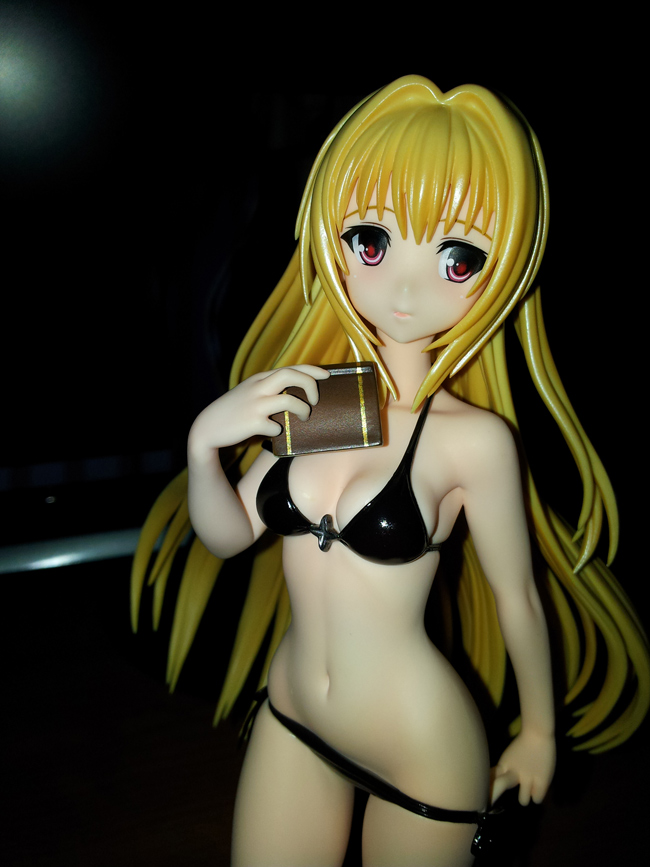 All in all, despite the already massive amount of swimsuit figures circulating around, this is still a pretty good figure to collect. While simple, she is just so pleasant to look at.